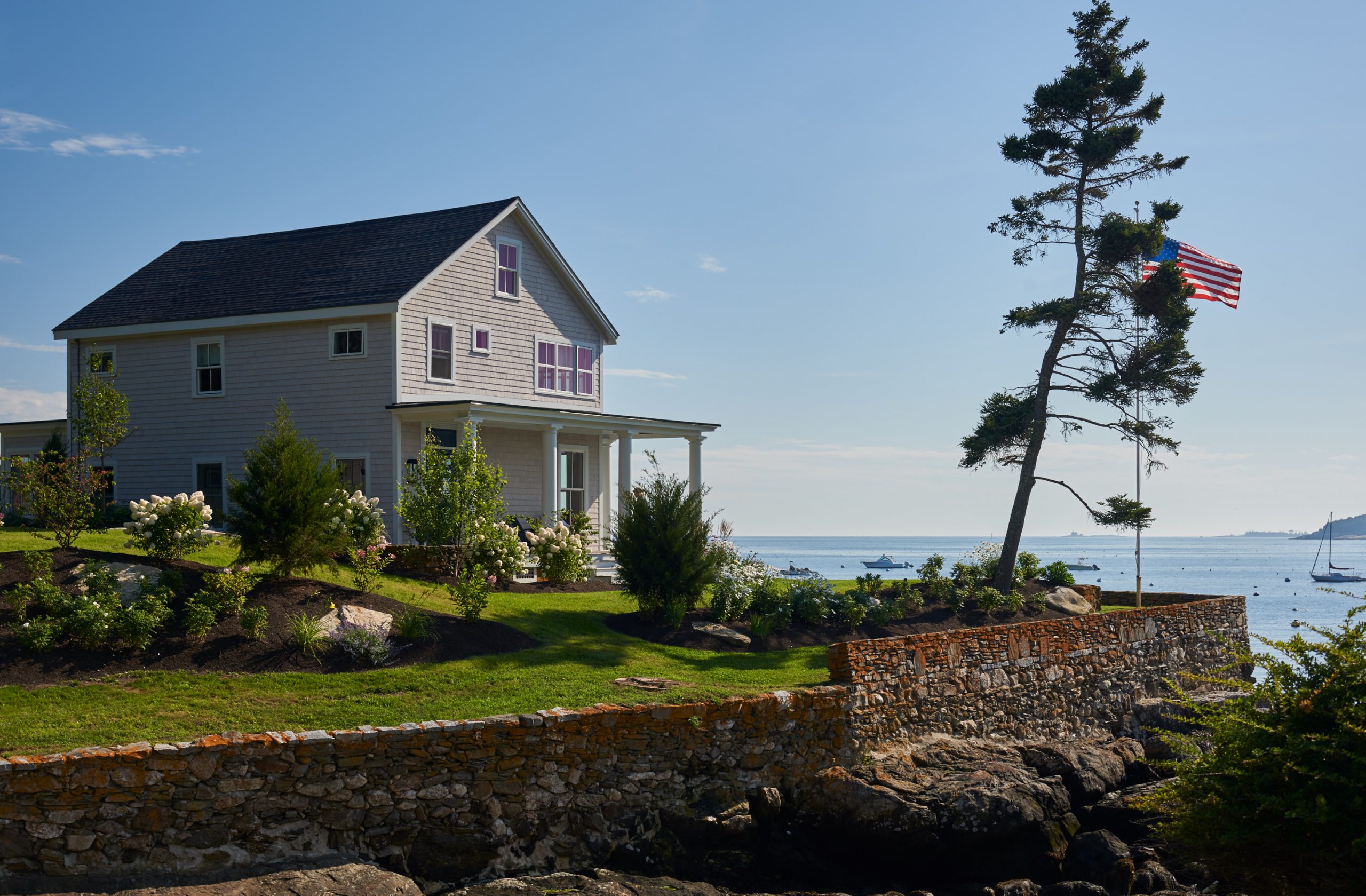 Between two inlets on Ocean Point sits a transitional Federal Greek Revival. The property enjoys sweeping waterfront views and a rich local history. Originally built in Augusta in 1906, the home was barged down the Kennebec River in 1926 to its current location, where it was home to the founders of Maine’s iconic Hussey’s General Store. Initially, without even knowing the property’s story, our clients were intrigued when they spotted a “For Sale by Owner” sign—a short time later, they were under contract to buy the property and had already begun imagining their restoration intent.

Longtime summer residents of Boothbay Harbor, the homeowners were charmed by the property’s prime waterfront location. They sought to preserve many of the original details while creating an updated guest house for visiting family and friends. With an interior design background, our client was an integral part of the home’s process and having worked with Knickerbocker Group on previous projects, the collaboration was another welcome opportunity to create something special together.

One of the primary challenges the team worked to address was how to bring openness to the space without altering the home’s original footprint. The first floor was marked by a series of small, disjointed rooms and failed to take advantage of the expansive views. To remedy this, multiple walls were removed and replaced with a steel beam to allow for an open living and dining area. A refurbished center pillar hides interior steel support, while giving nod to the iconic exterior porch details and restoration.  A crisp, white kitchen with open shelves and pops of brass extends just beyond the entertaining spaces. Windows throughout the first floor retained original molding features, a characteristic medallion the homeowner loved. In the sunroom, once only used in warmer months, baseboard heat was installed to allow four-season use.

One of the home’s most distinguishable features is an expansive wrap-around porch that offers sensational harbor views. While the porch’s original columns were unable to be salvaged, replacements were procured that are akin in style. To not detract from the view, cable railings were installed. Where possible, original features were maintained, including the front door—painted a deep blue, and the ornate staircase and banister—all thoughtfully restored remnants of the home’s past.Upstairs the layout was reconceptualized for each of the three bedrooms to have water views. One bedroom of which, was transformed into a bunk room, whimsically decorated for visiting grandchildren. Custom-built beds from Furniturea, a fish sculpture by Cindy Pease, and artwork by André Benoit create a bright and imaginative slice of Maine.

Replacing a staircase to the attic with a pull-down stairway allowed for the inclusion of a second upstairs bath, where a clawfoot tub overlooks the vast coastal view. An original small fourth bedroom was transformed into a common bathroom to add ease for visitors. The design incorporated a custom concrete sink by Stone Craft Iconic Concrete, accented with white subway tile. Windows were treated with custom canvas curtains, sail blocks, and cleats—a clever tribute to the bustling marine traffic at Ocean Point, which comes and goes from sunrise to sunset.

Beautifully reimagined, this enchanting slice of Ocean Point history is primed for its next chapter.

As seen in the June 2020 issue of Maine Home+Design. Read it here. 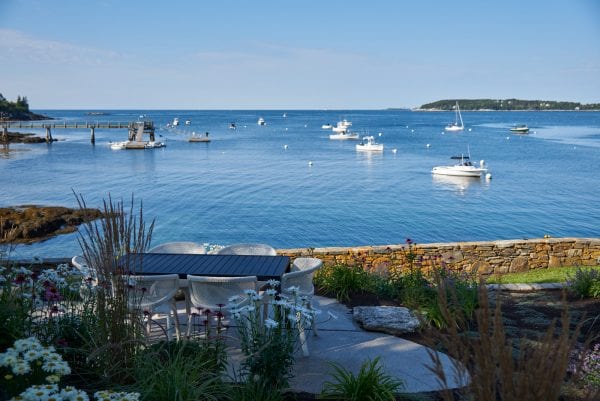 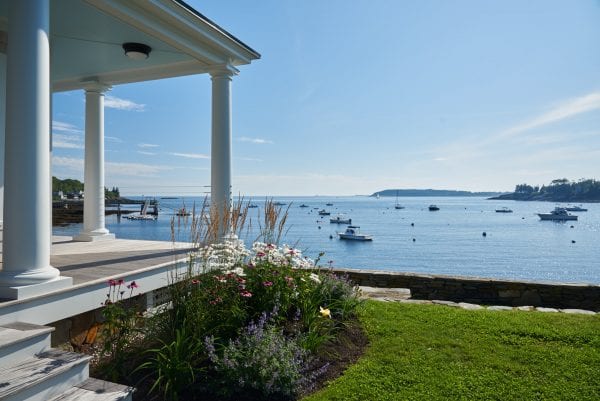 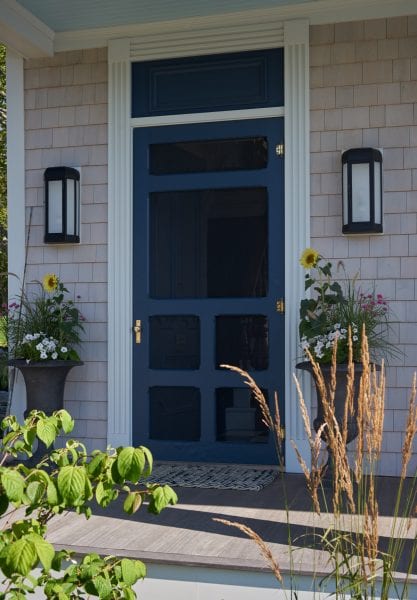 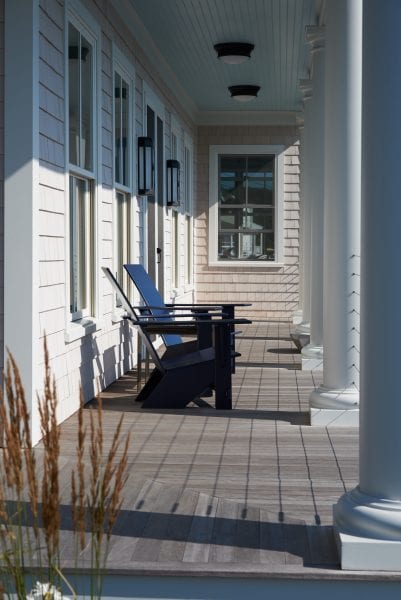 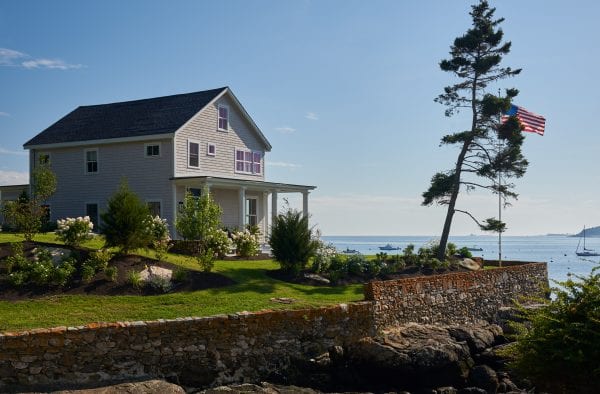 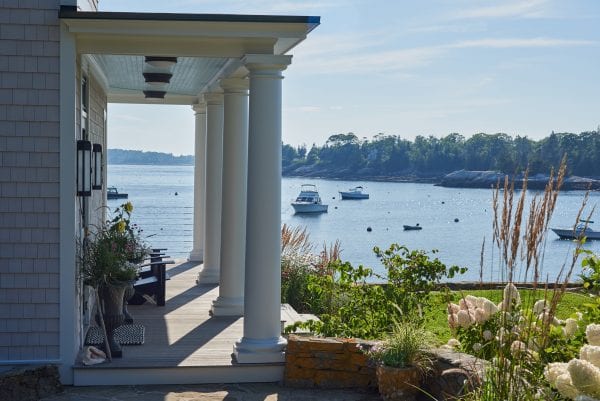 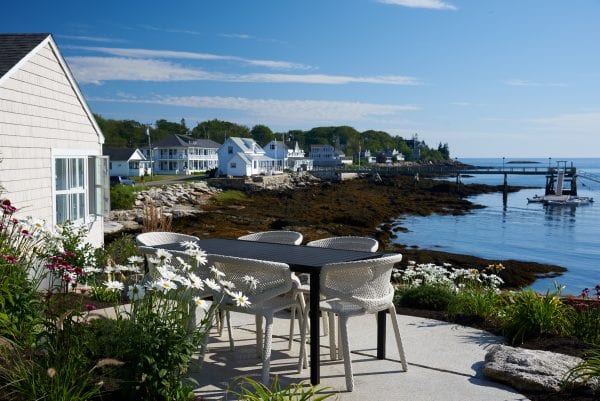 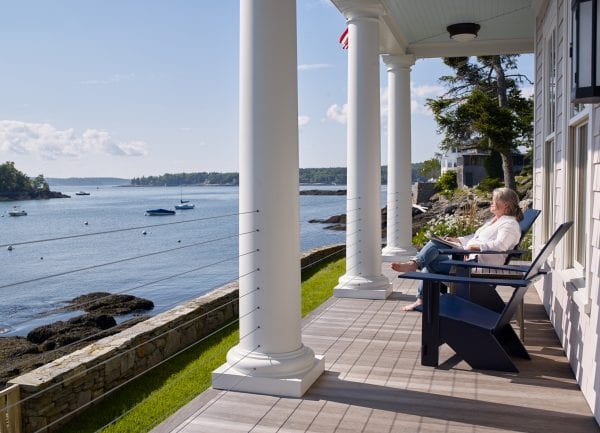 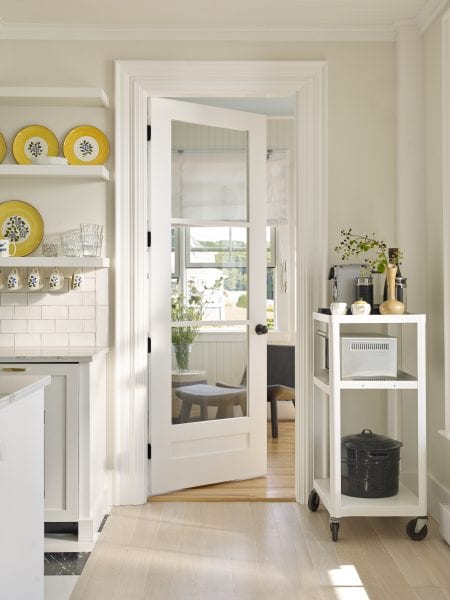 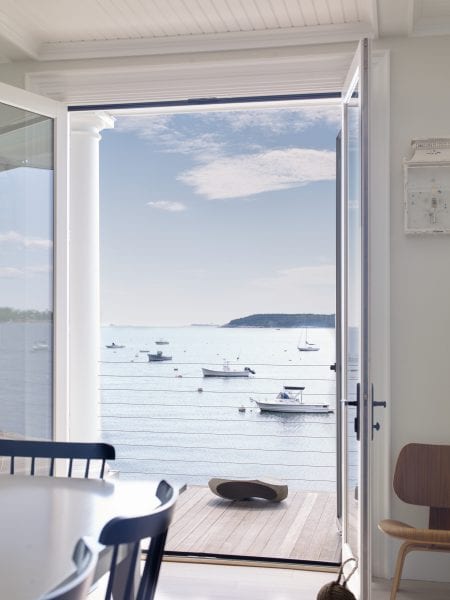 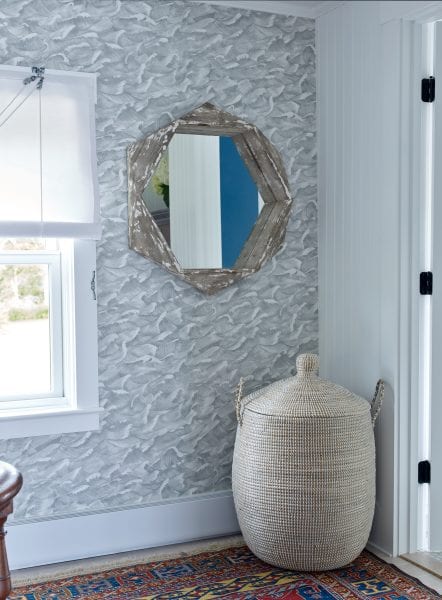 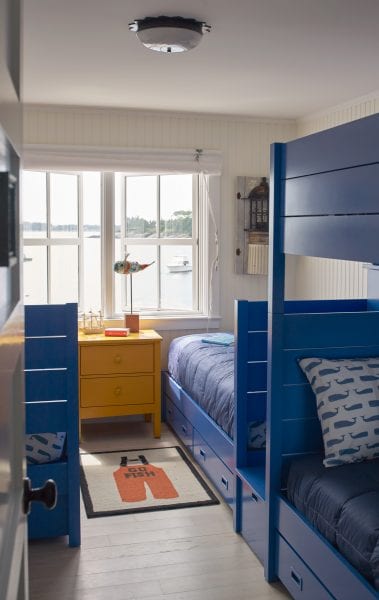 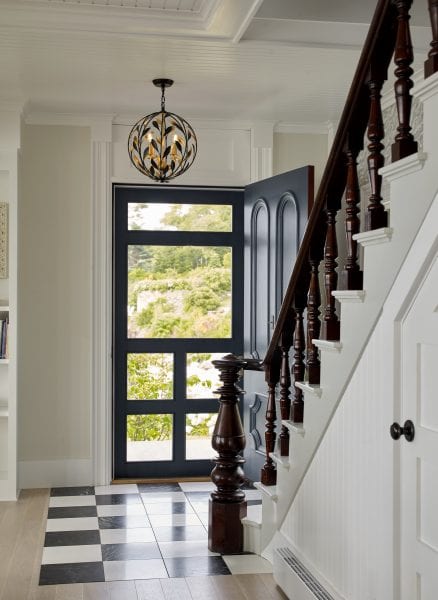 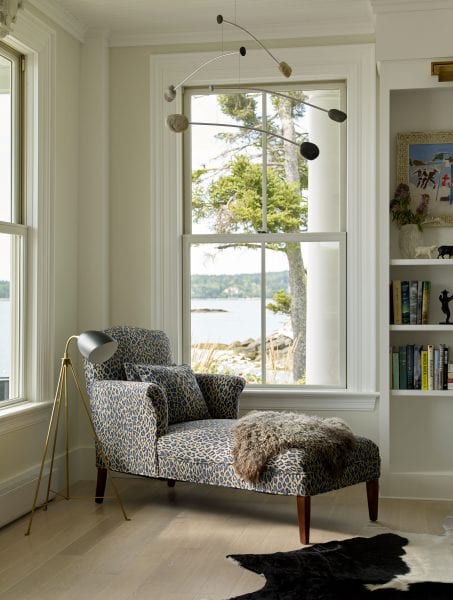 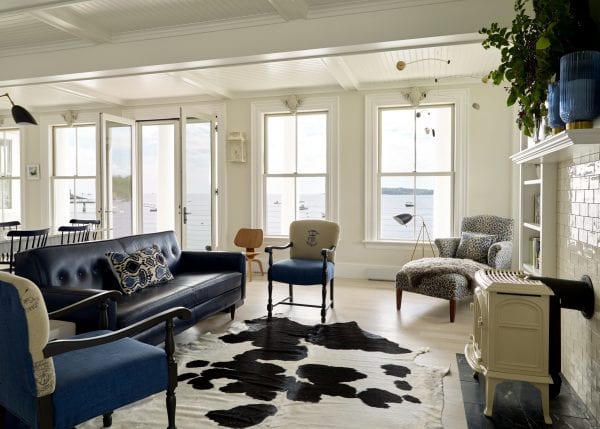 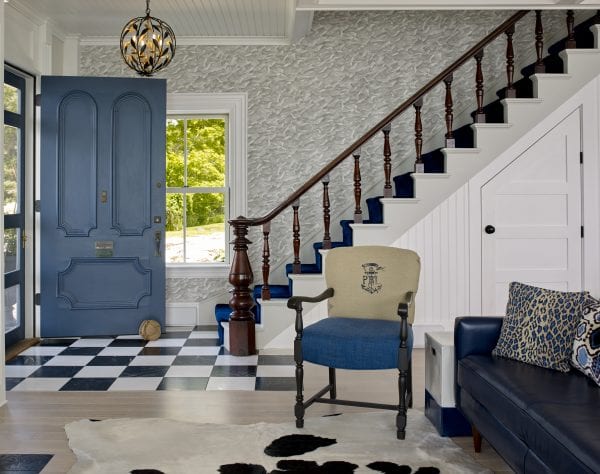 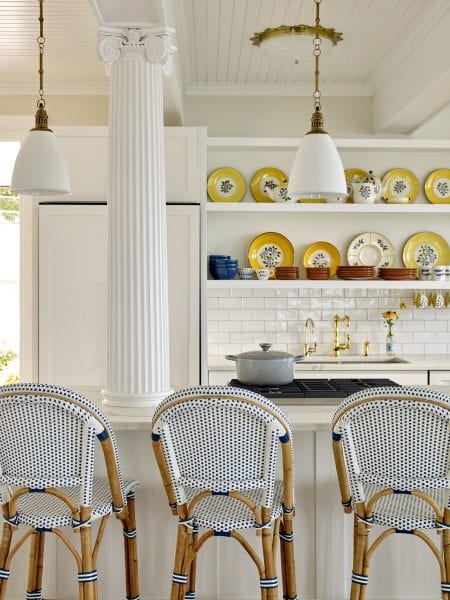 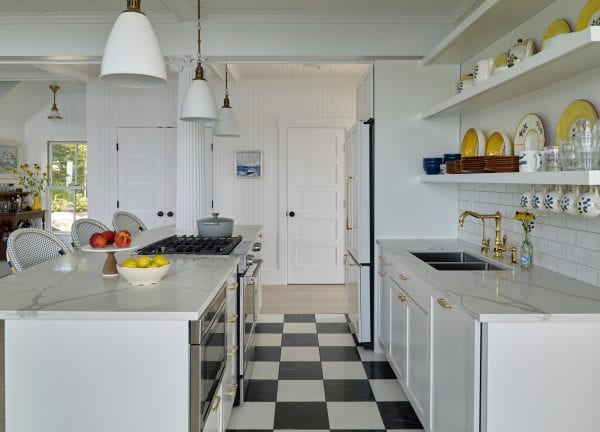 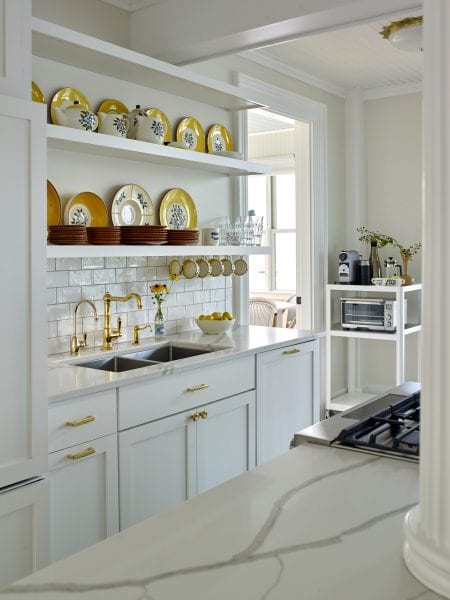 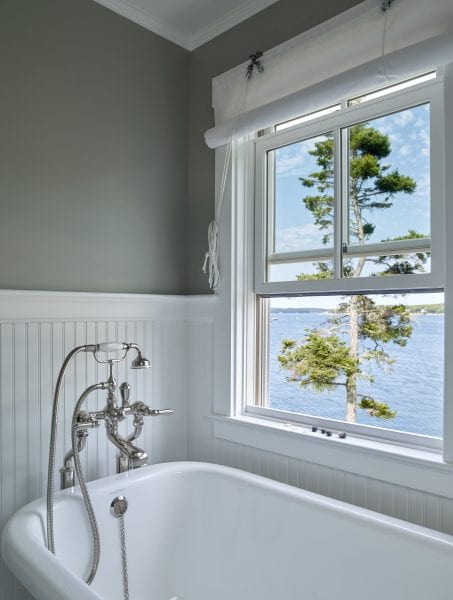 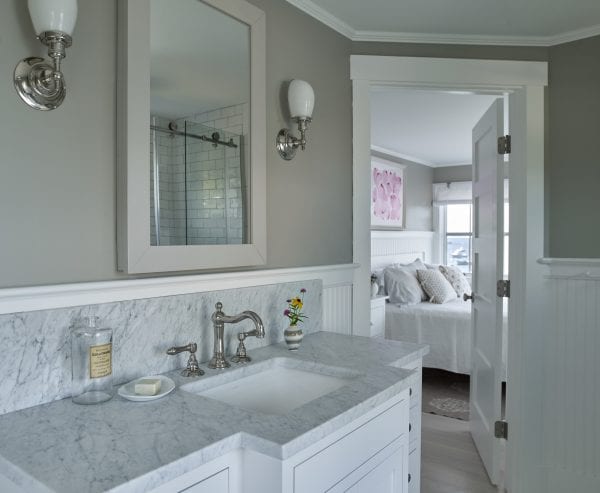 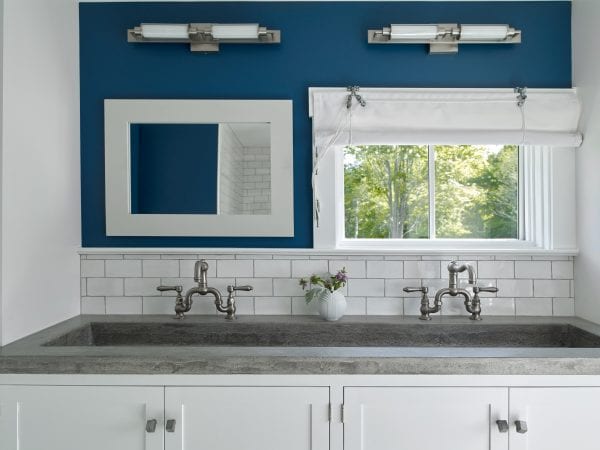