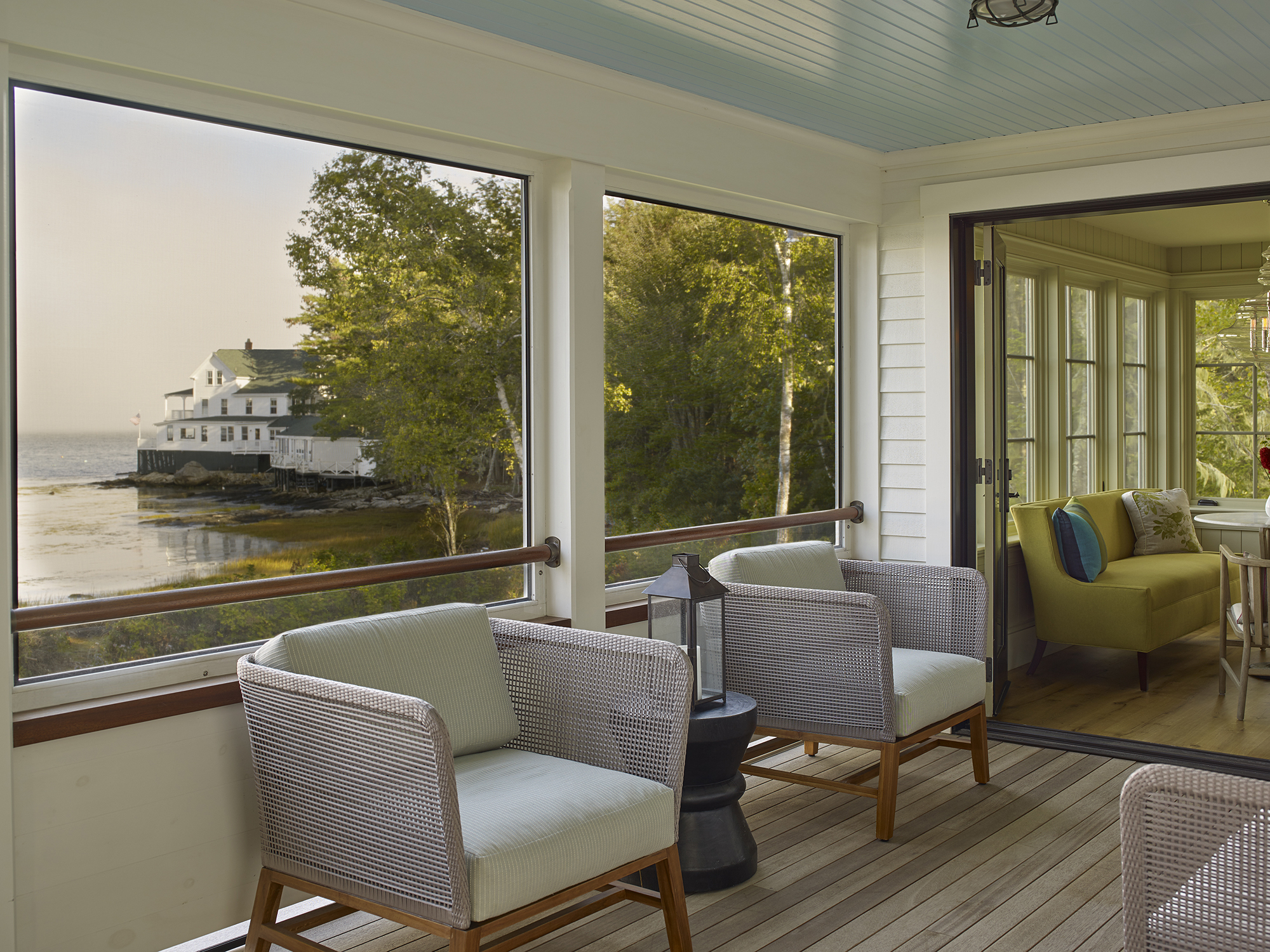 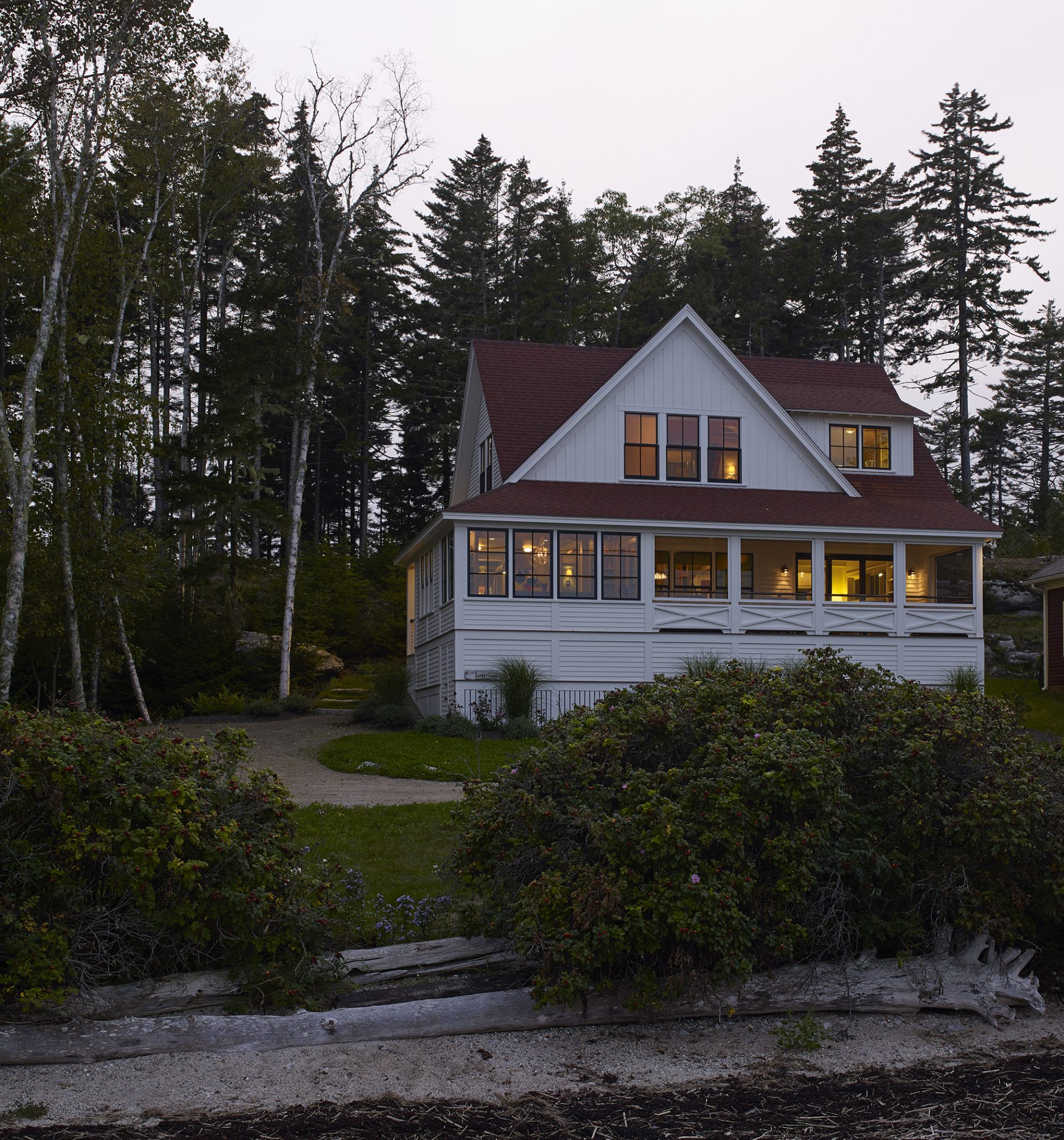 Capitol Island: a quintessential summer community on an island just three-quarters of a mile long and 700 feet at its widest point. It is a place where everyone-knows-everyone, and the main dirt road of 15 mph is busier with local foot traffic than cars. By and large, the properties on Capitol Island are owned by the original families of the 1870s—translating to one of Maine’s most intact historic summer communities. 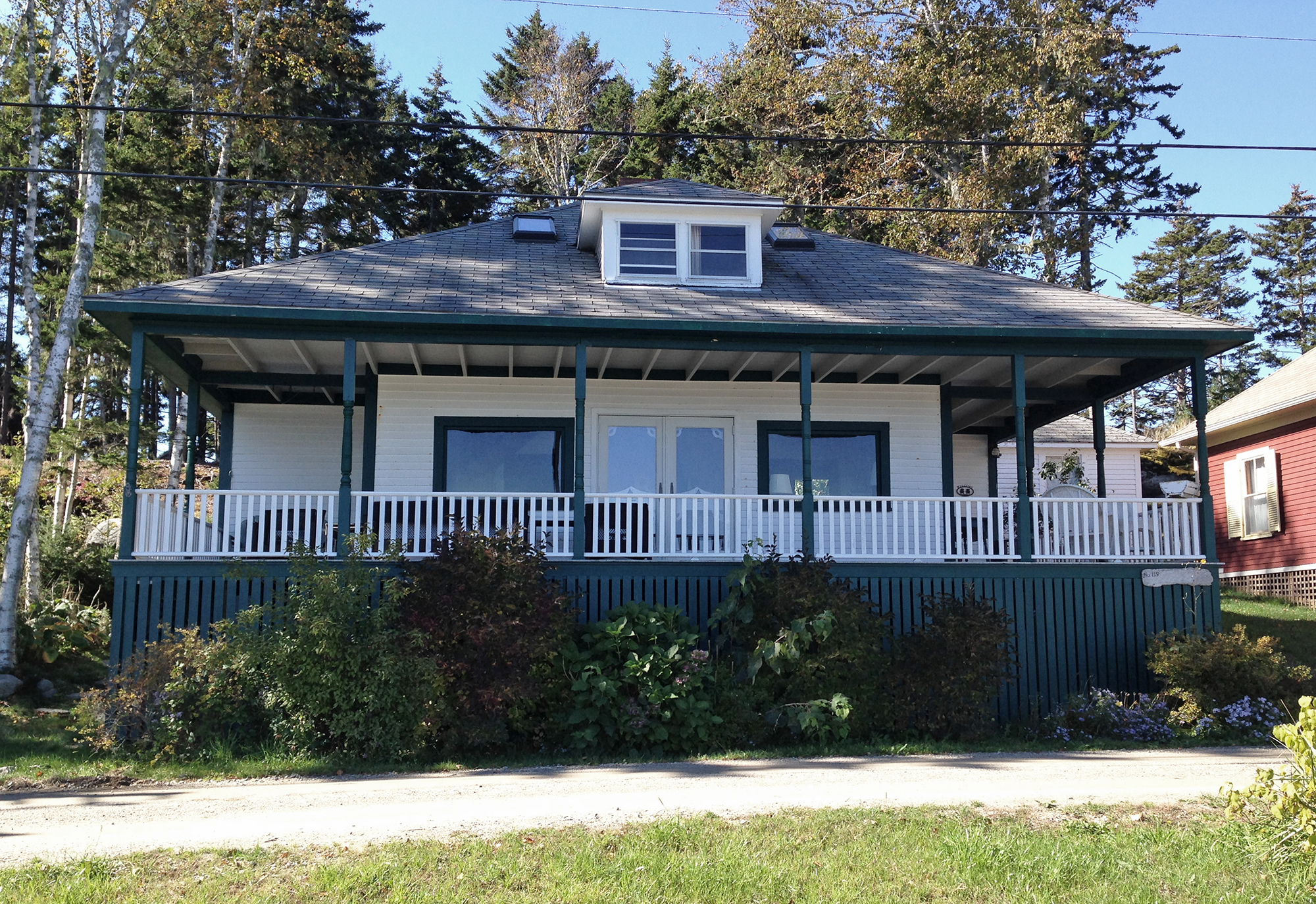 The permitting for the cottage took over a year, including many meetings with the Southport Planning Board, neighbors, and members of the Island Association. The building envelope was extremely tight, and at times, the designers were literally working within inches (squared and cubed!). Everything about the existing cottage did not conform—it was inside the 75-foot shoreline setback, both side setbacks and the front setback – and the nonconformities were analyzed in both area and volume.  As a further complication, a series of steep ledge outcrops rose over 20-feet high directly behind the existing cottage. It was a 3-dimensional puzzle and the solution evolved from a successful collaboration between the design team, homeowners, town and key players in the community. 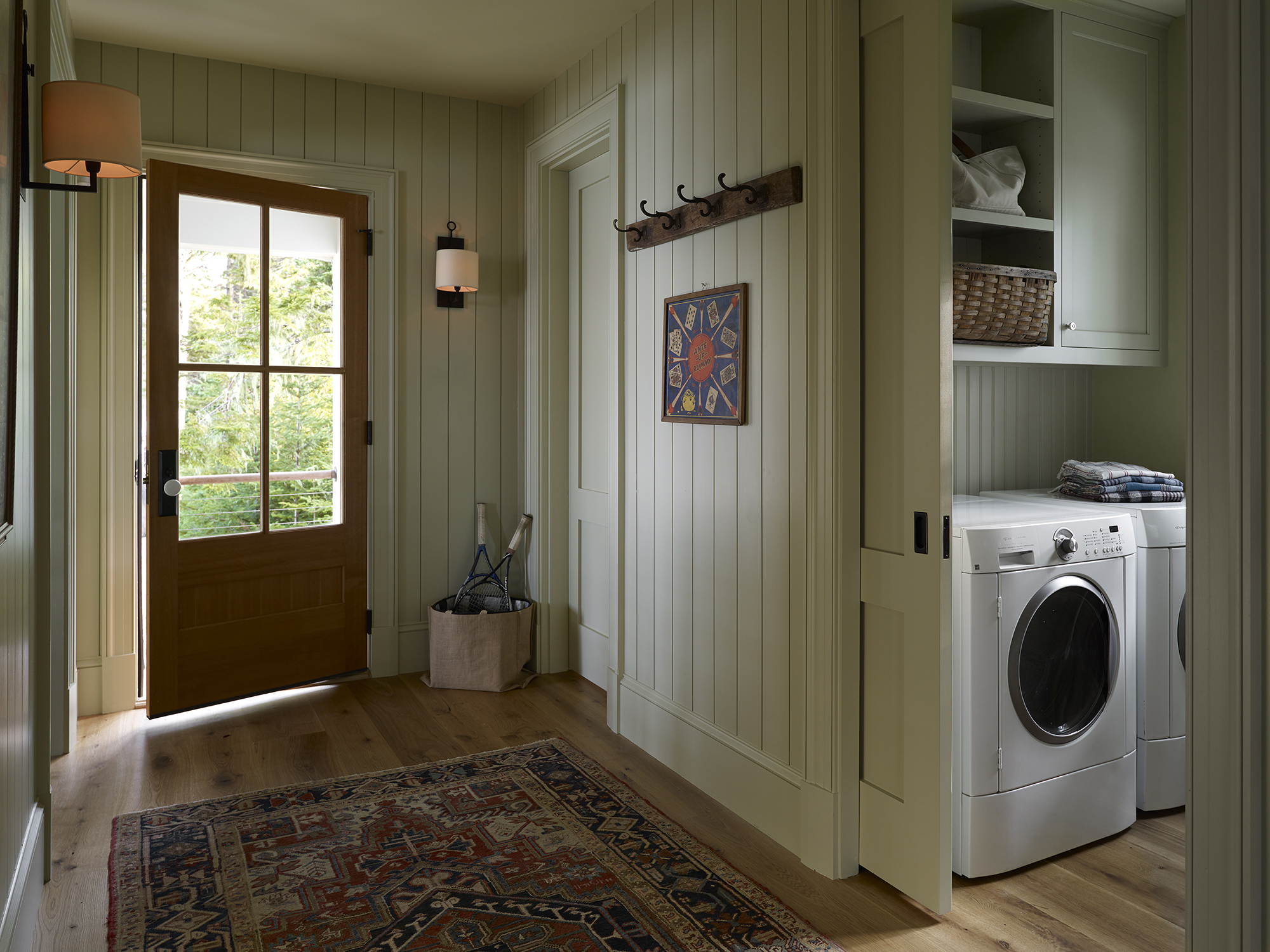 The property is historically rich, with the owner’s children being the 5th generation to have come to the island during their summer months. The homeowner recalls his own childhood excitement, “The last day of school marked when mom would load us up in the car and we would just go!”

The clients knew early on they needed to reconfigure to accommodate their four children, and it was evident the old structure would not support such growth. Knickerbocker Group put forth design concepts for a new cottage. In place of the original 1920s Sears Bungalow, sits a home inspired by the island’s historical aesthetic and designed to support the active summer colony culture. 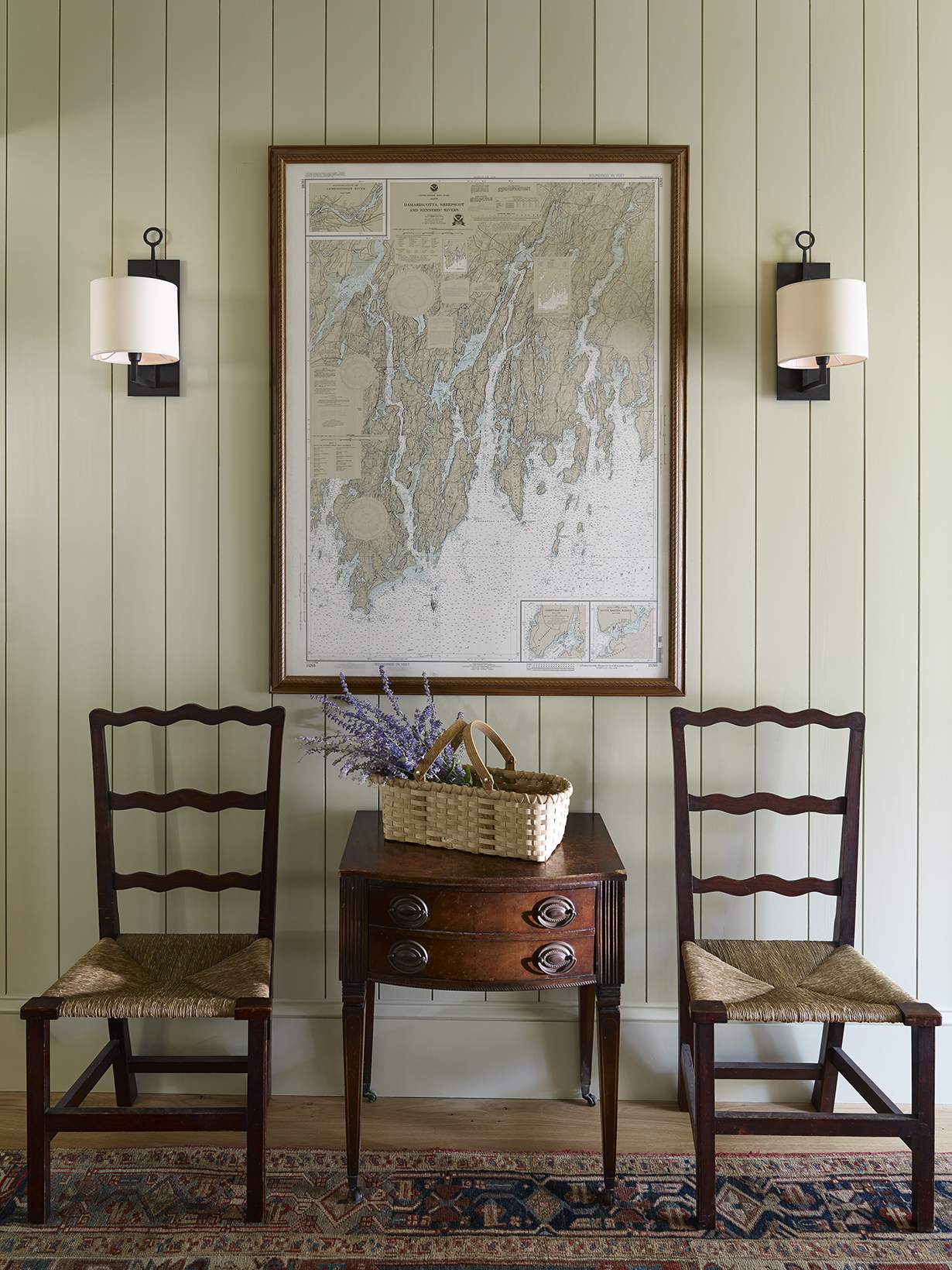 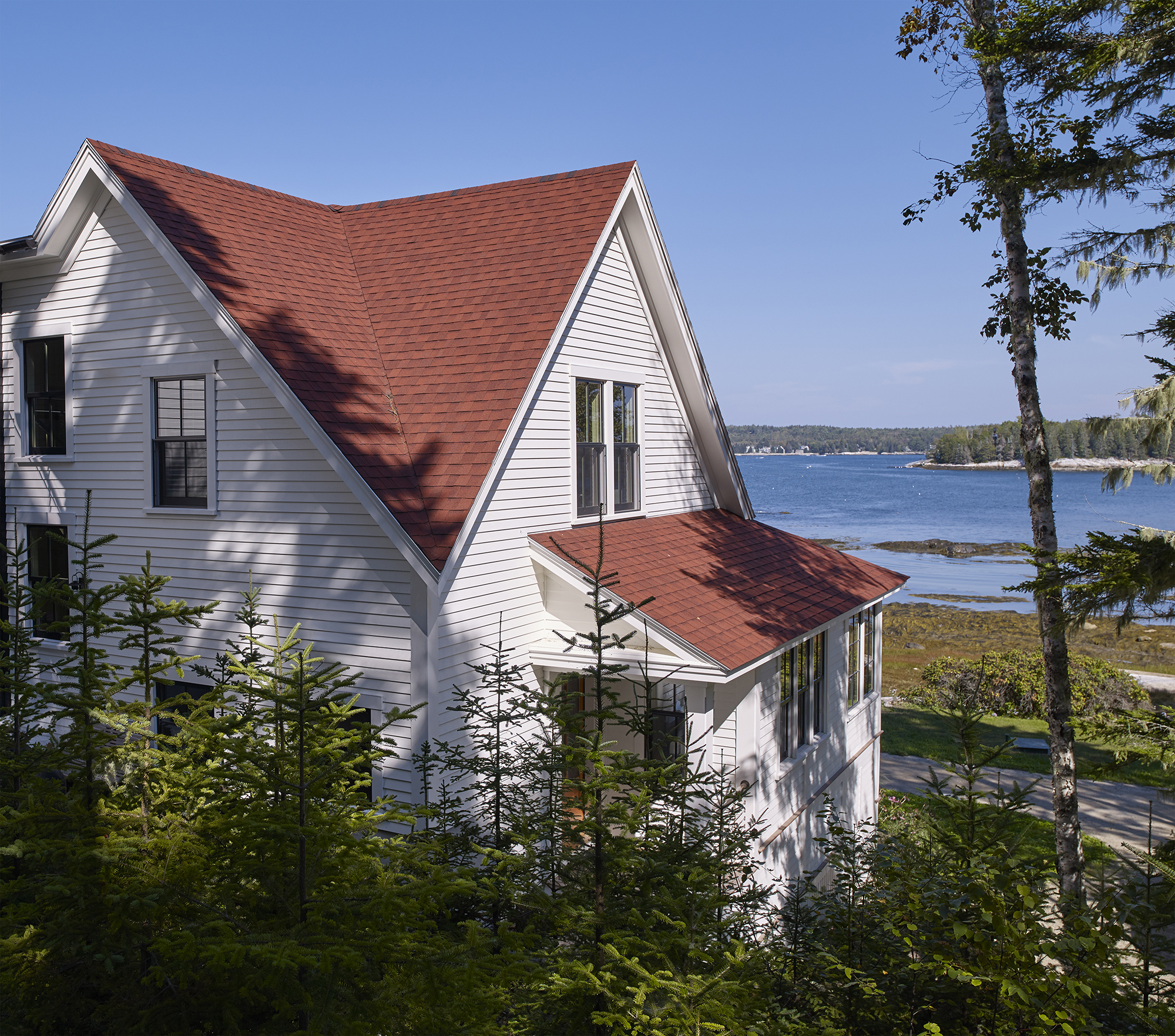 As longtime island residents, our clients’ primary goal was that the new cottage embody the sense of community on the island and honor the charming and traditional elements found in so many of the old island cottages. Signature accents known throughout Capitol Island are part of the design, such as the cross-gabled roof, two over two windows, and the mixture of shingle, clapboard and board & batten siding. 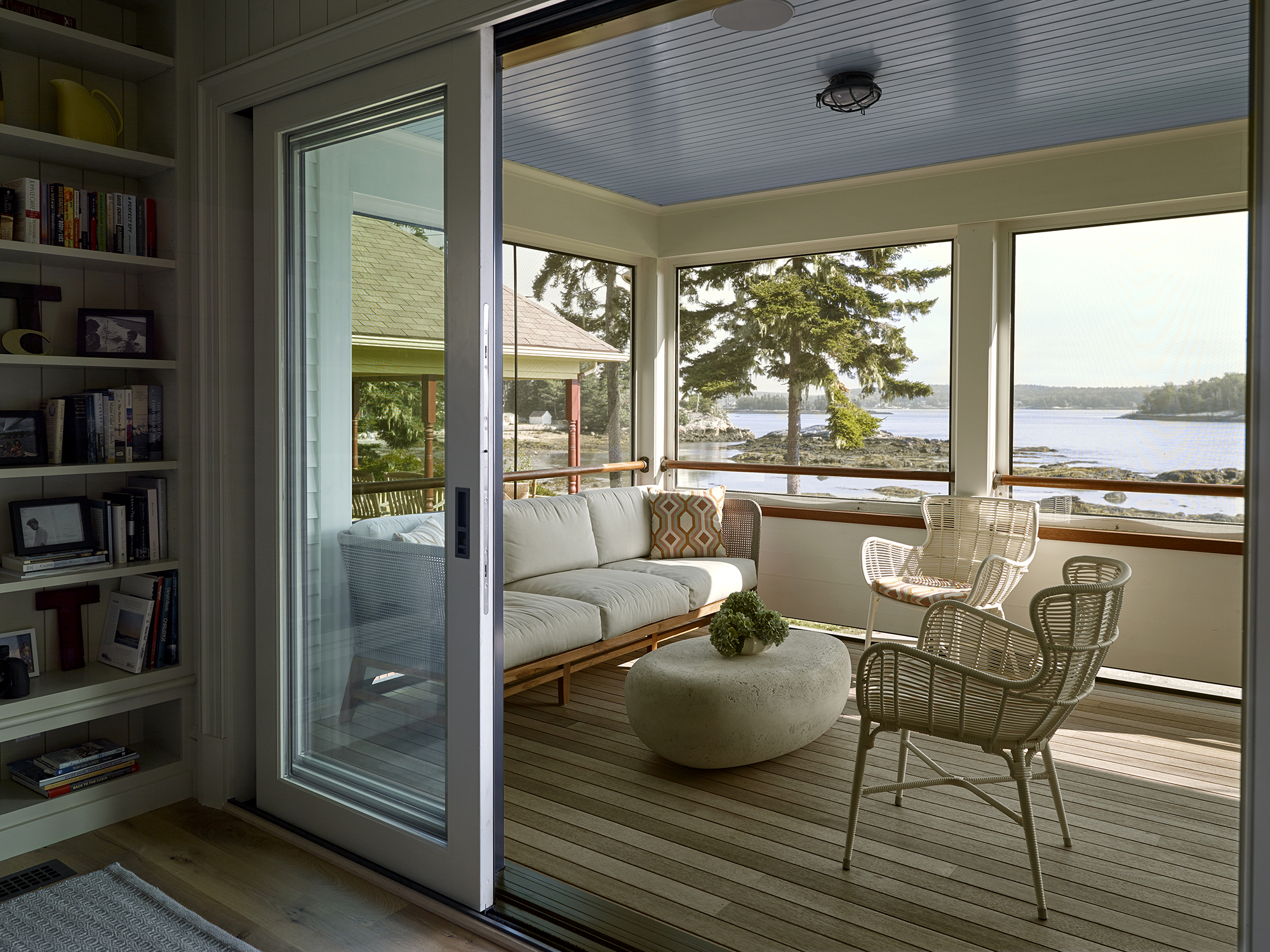 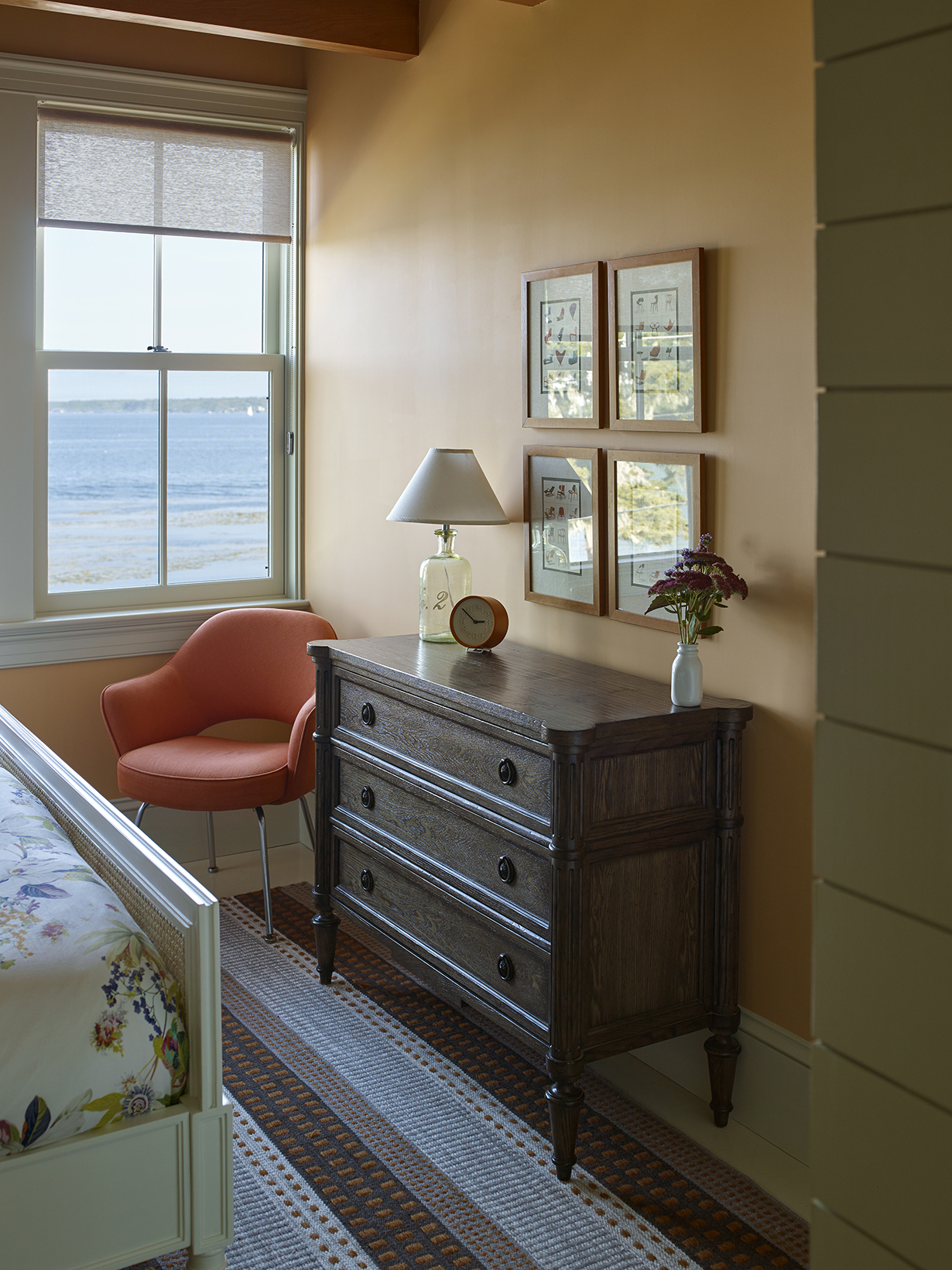 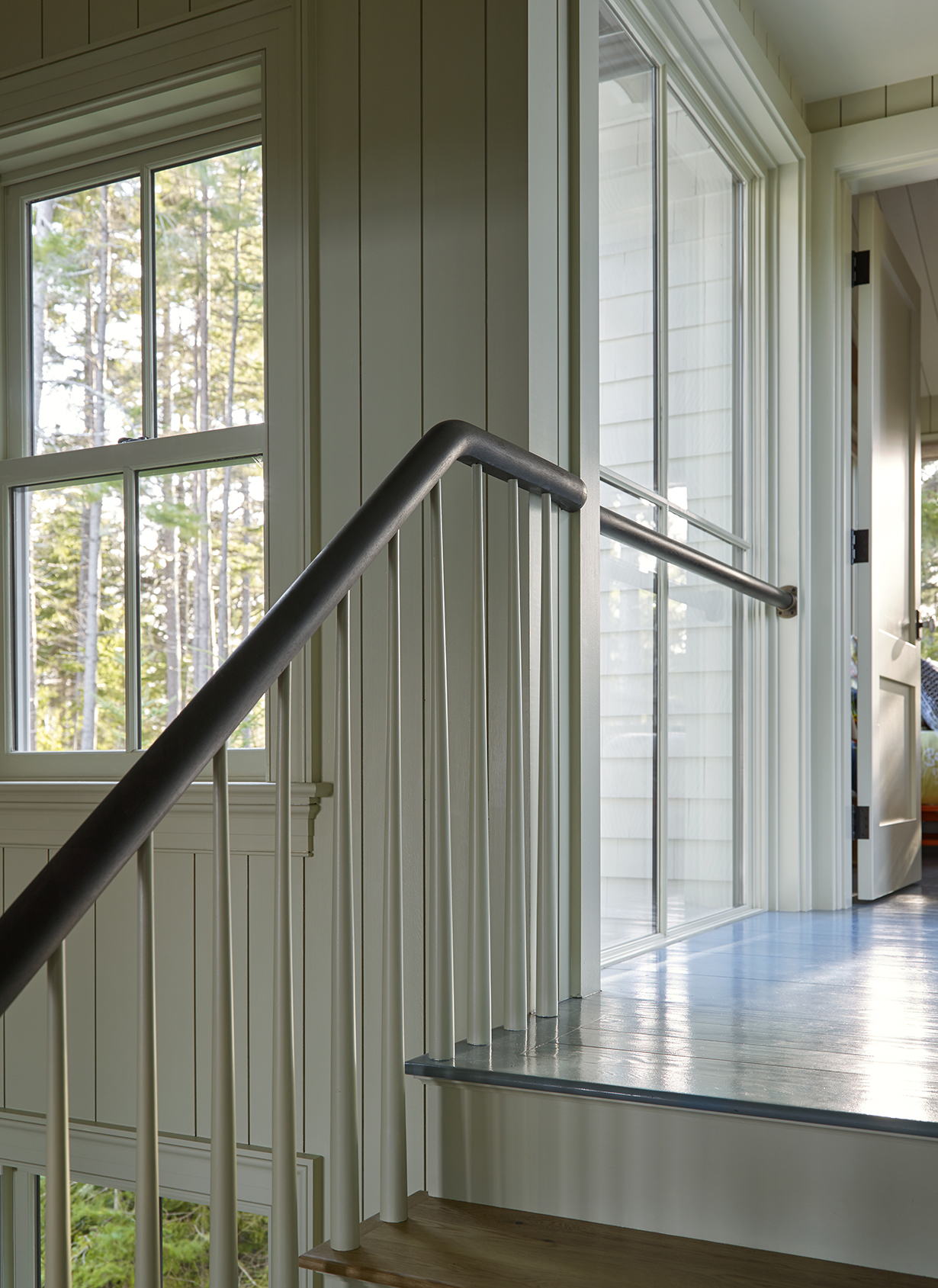 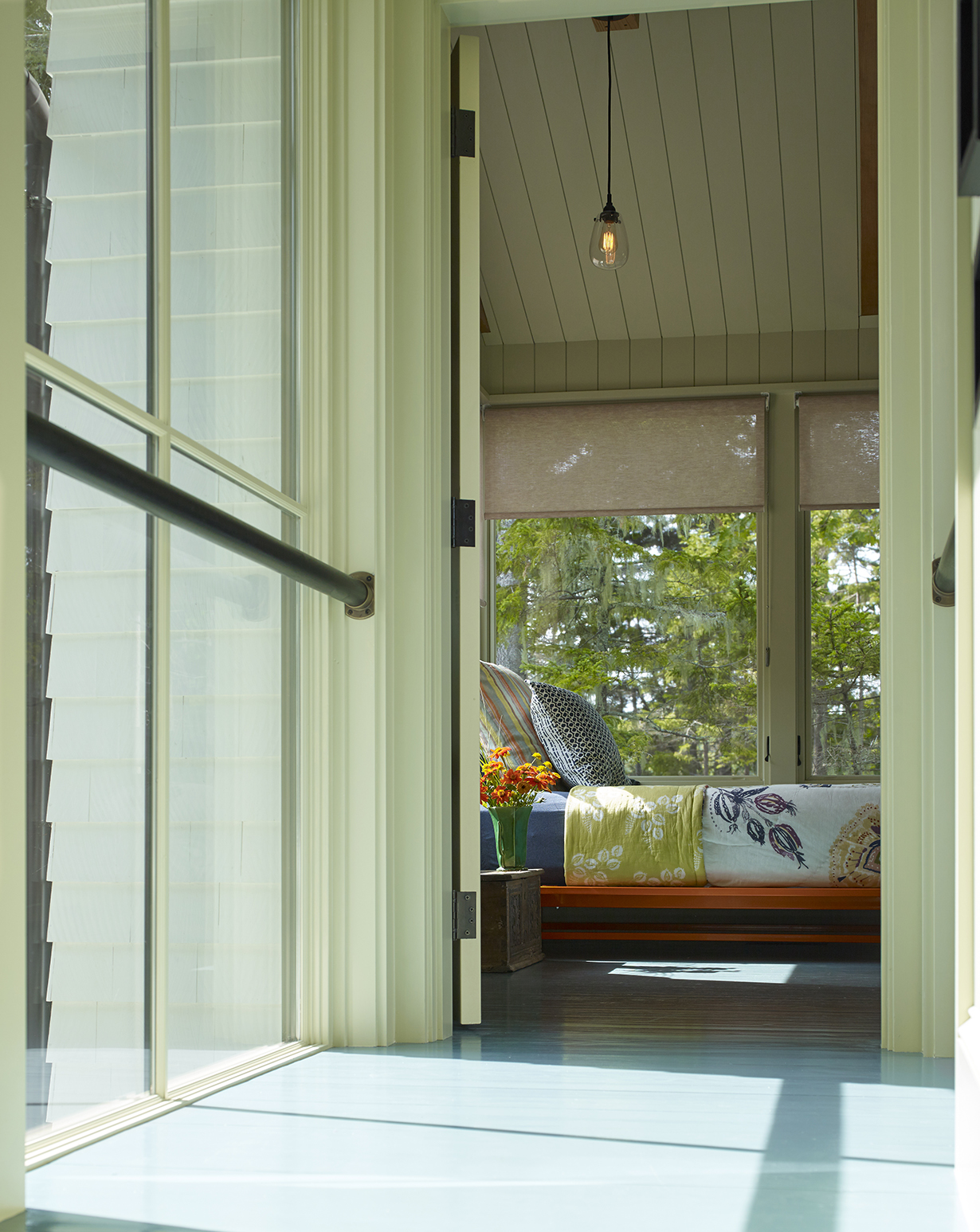 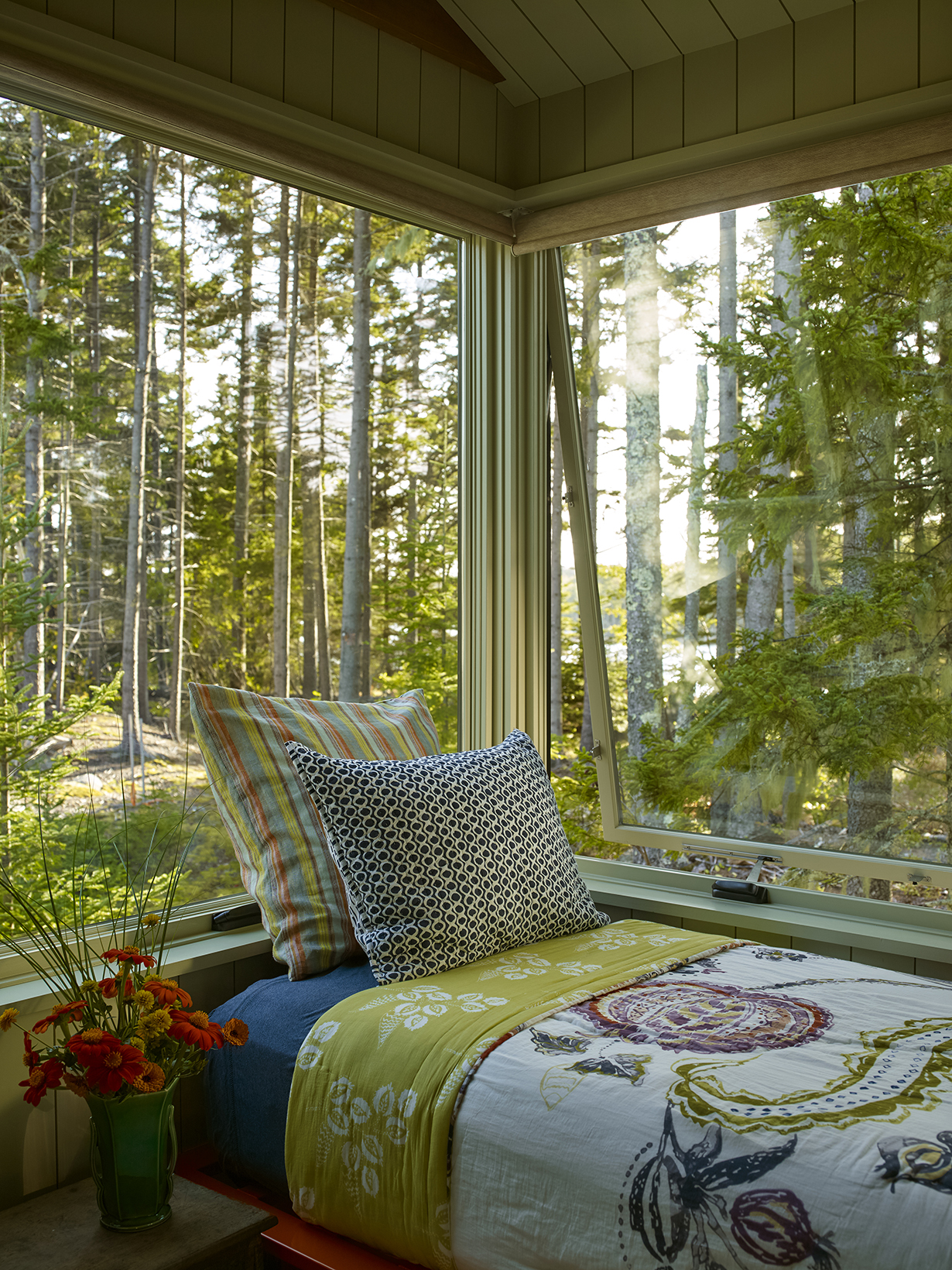 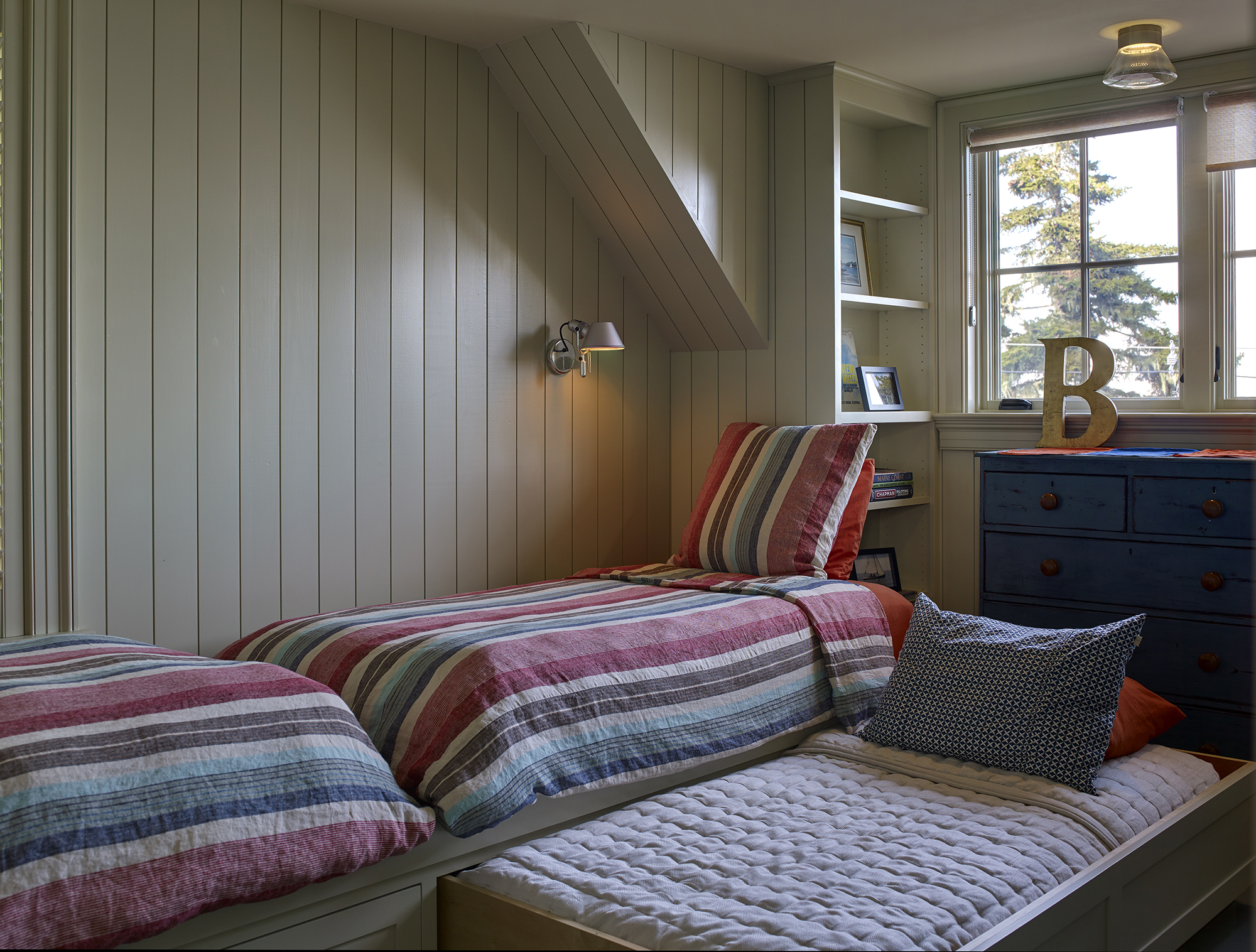 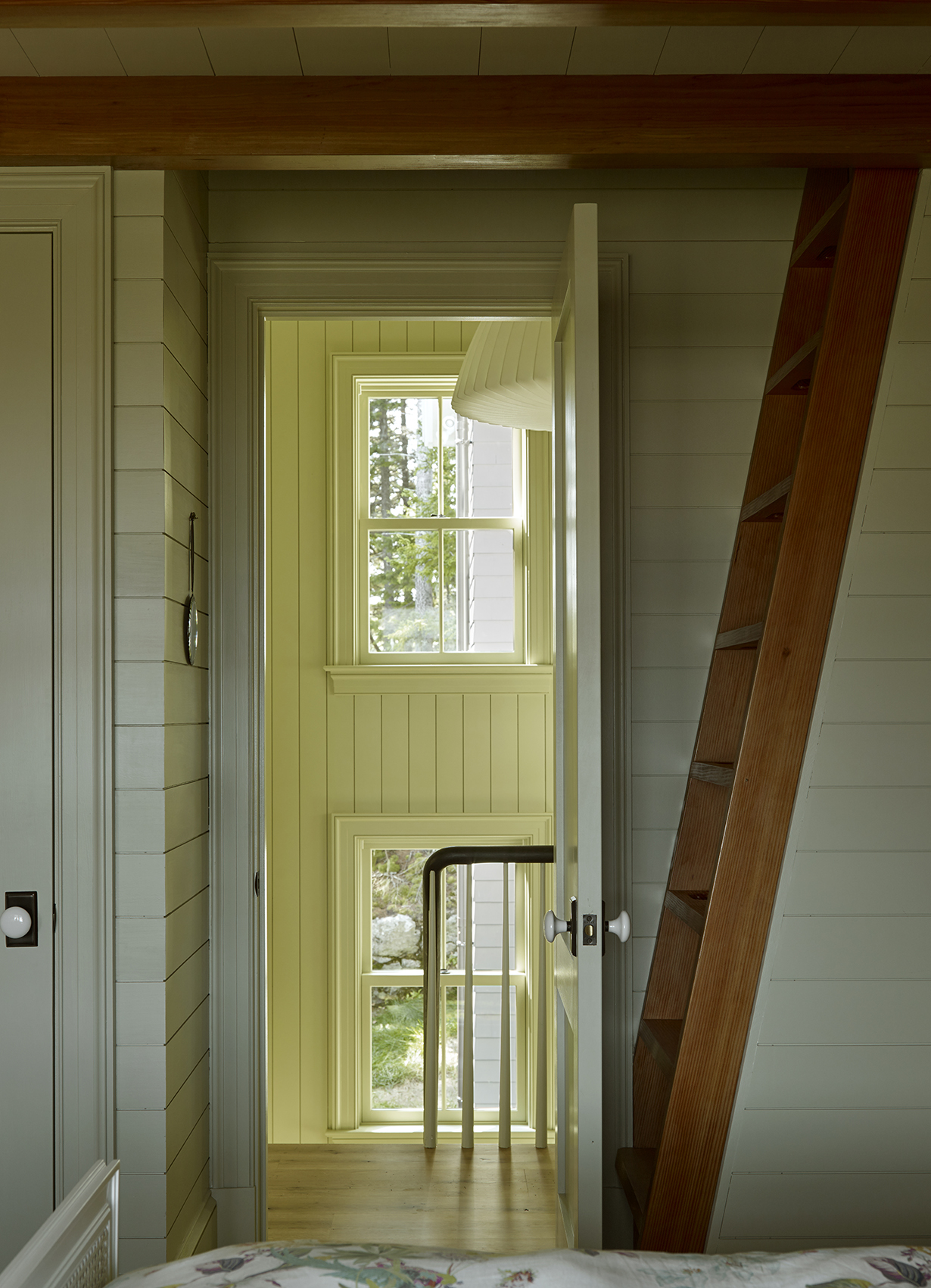 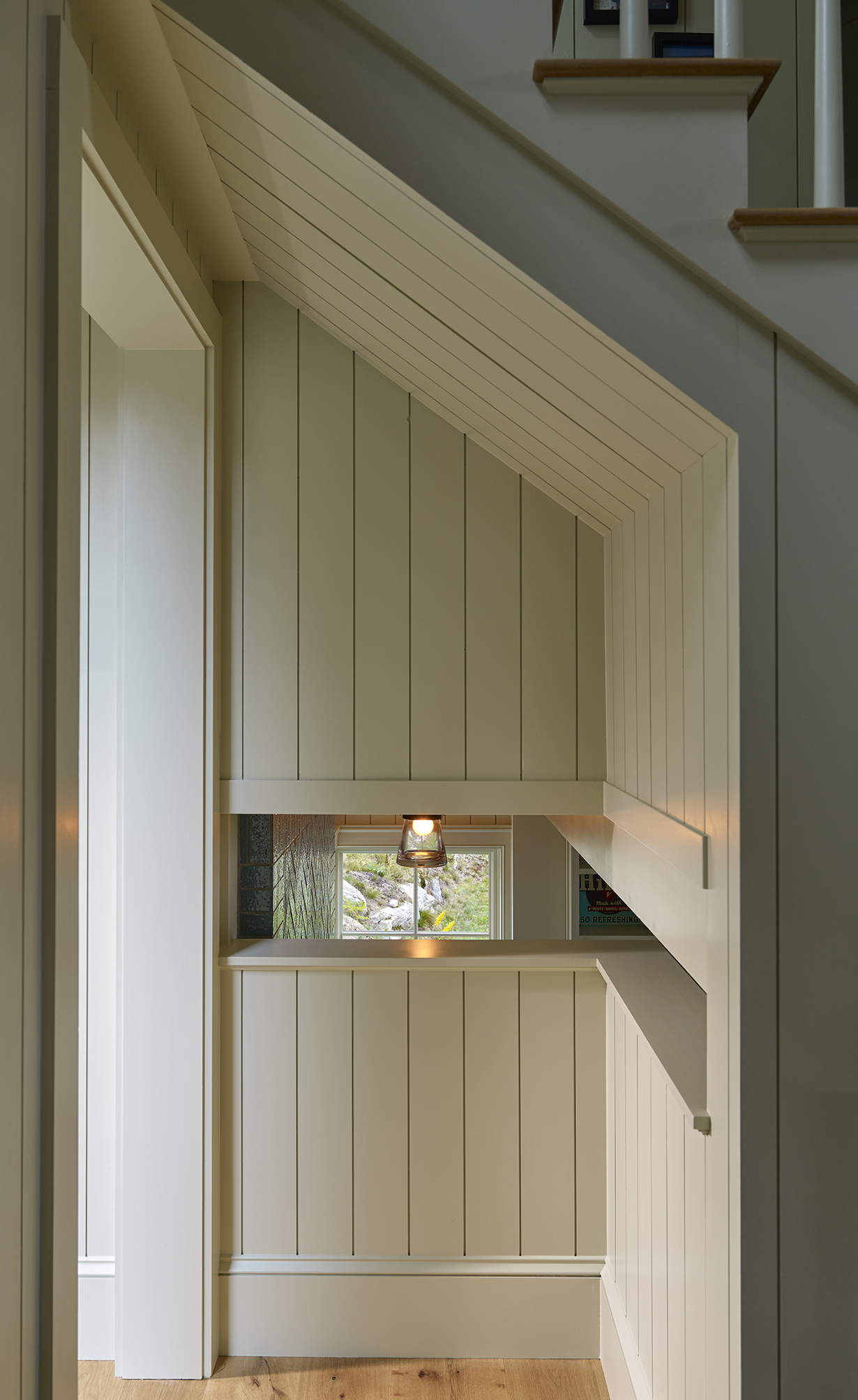 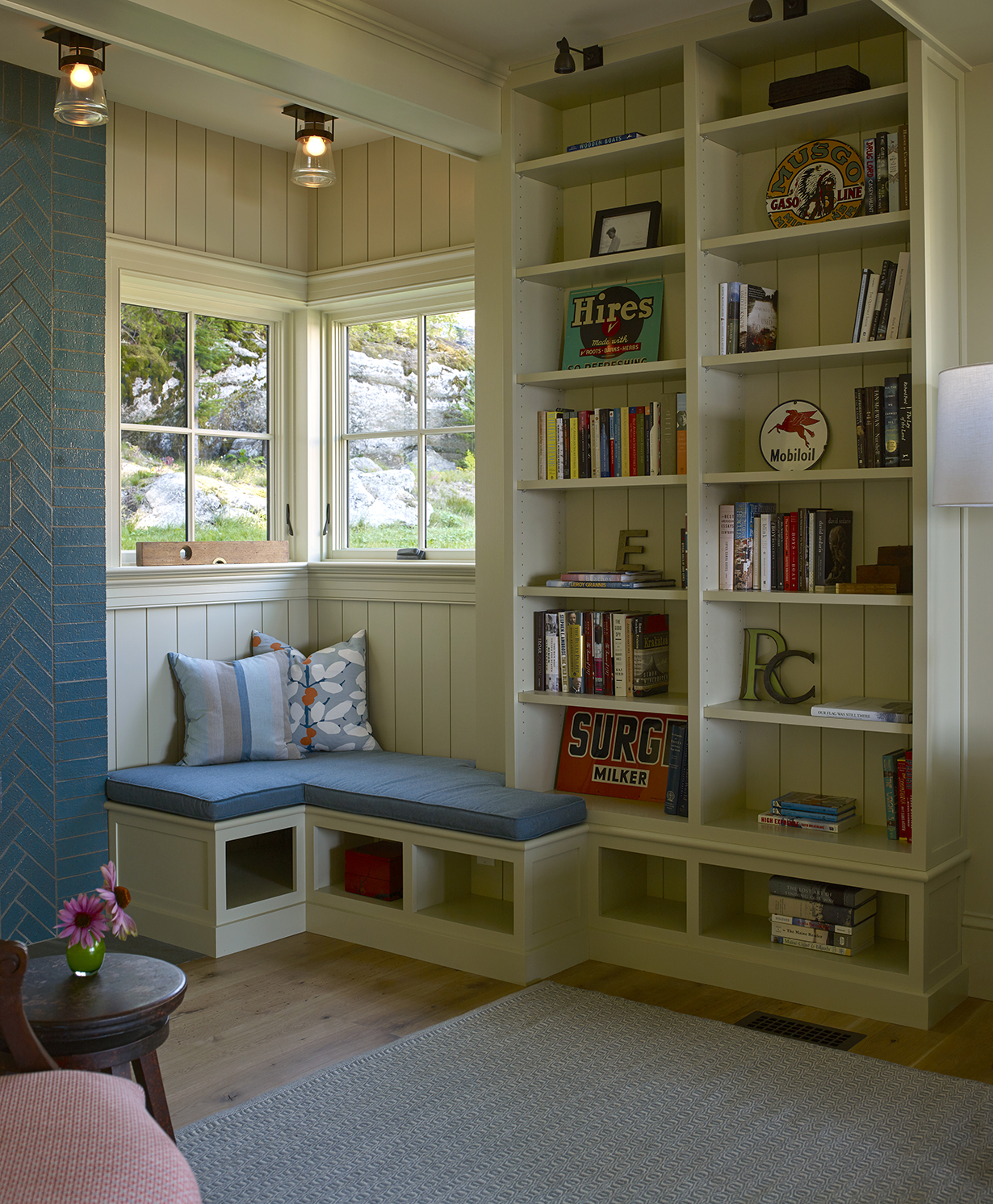 In keeping with Capitol Island tradition, the front porch wraps around the front and entry side of the home, with portions enclosed and others left open to maintain a connection with those that happen to stroll by.  Intentionally elevating the porch of the new cottage allows for some privacy and quiet leisure, a spot to relax unnoticed with a favorite book or for an afternoon nap.

Paired with the Maine cottage vernacular are subtle inspirations from outside influences. Design twists and quirky details are integrated in a way that is both fun and discrete.  Carved into the hillside, the back of the structure nests into the rising ledge.  A glass bridge connects to a bedroom known as the “tree house”. The bridge allows one to float between spaces, while bringing the outside environment in. With this clever connection to the upper ledge, the treehouse captures water views to the opposite side of the island. 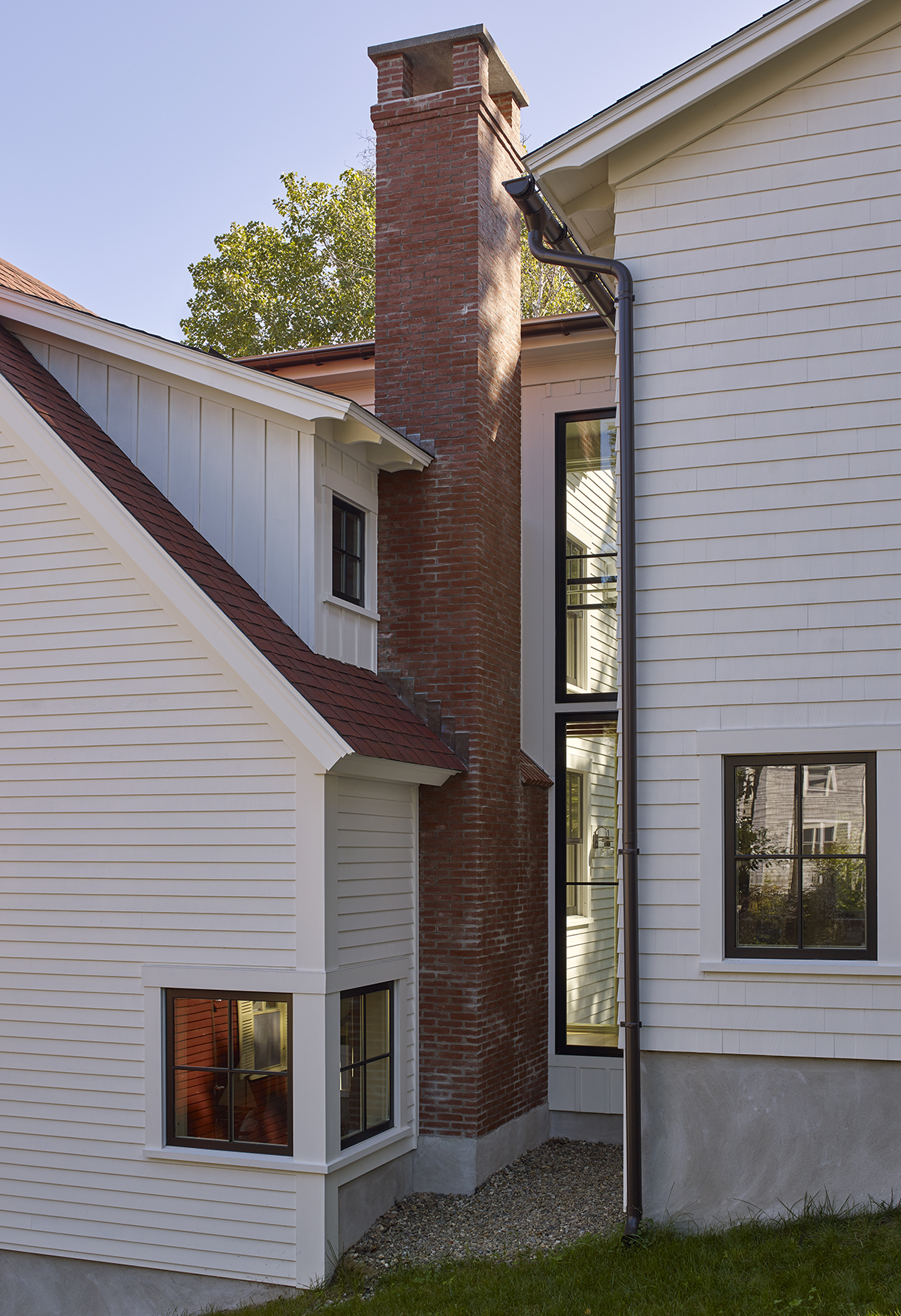 With bunkbeds, loft beds, and trundle beds, there are plenty of fun spaces to sleep, relax or play hide-and-seek. “We worked with the layout over and over again, accounting for family time, and space being of utmost importance—dinnertime and family meals, and the constant flow of kids and summer sleepovers. It forced creativity and led to surprises.” —Homeowner 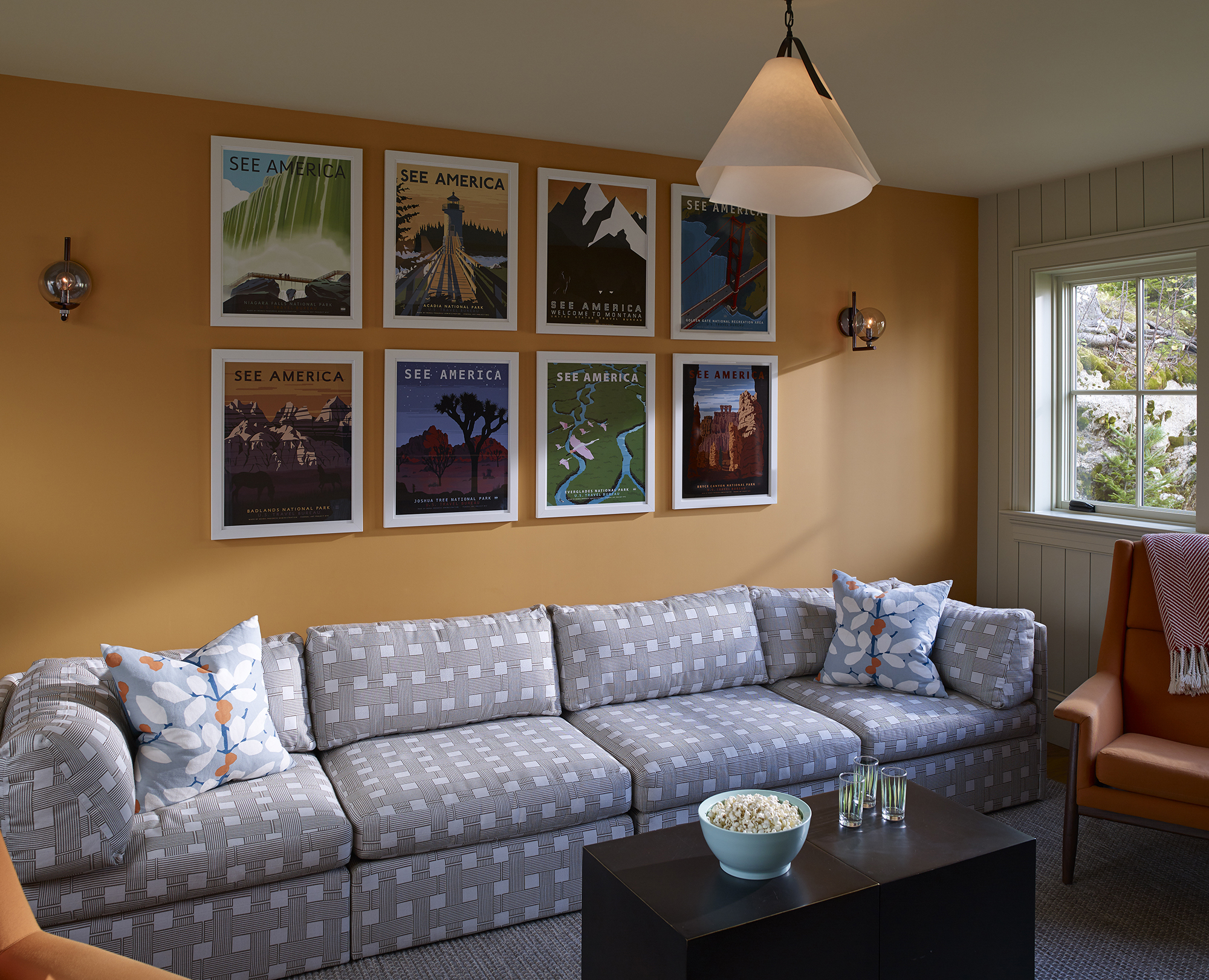 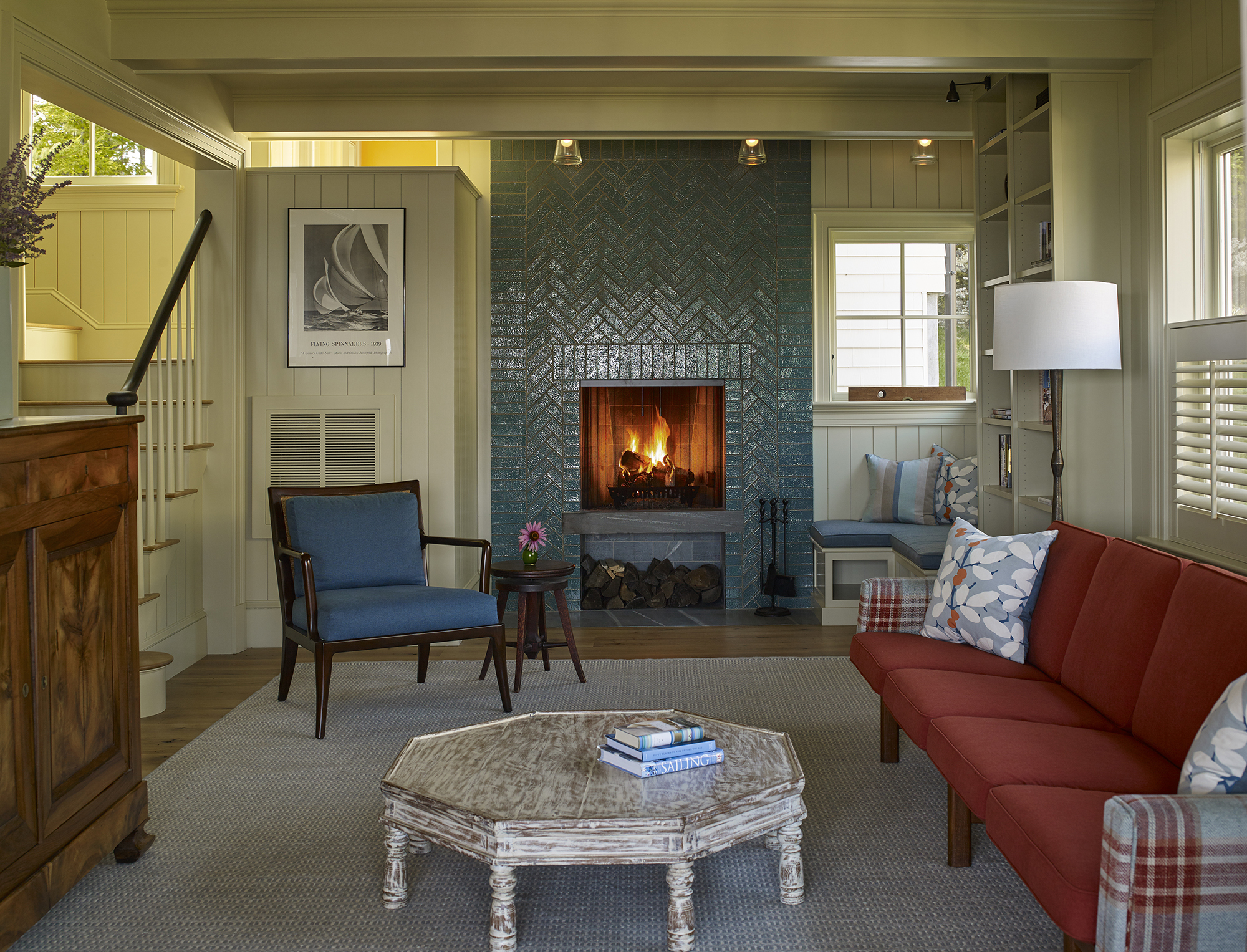 In tandem to the many innovative architectural details, Phillip Miller, interior designer of America Dural Inc., curated the home flawlessly with his interior design, from the color palette to the thoughtful integration of the client’s taste.  Maine cottage merges with antique and modern touches in a zesty, harmonious style. 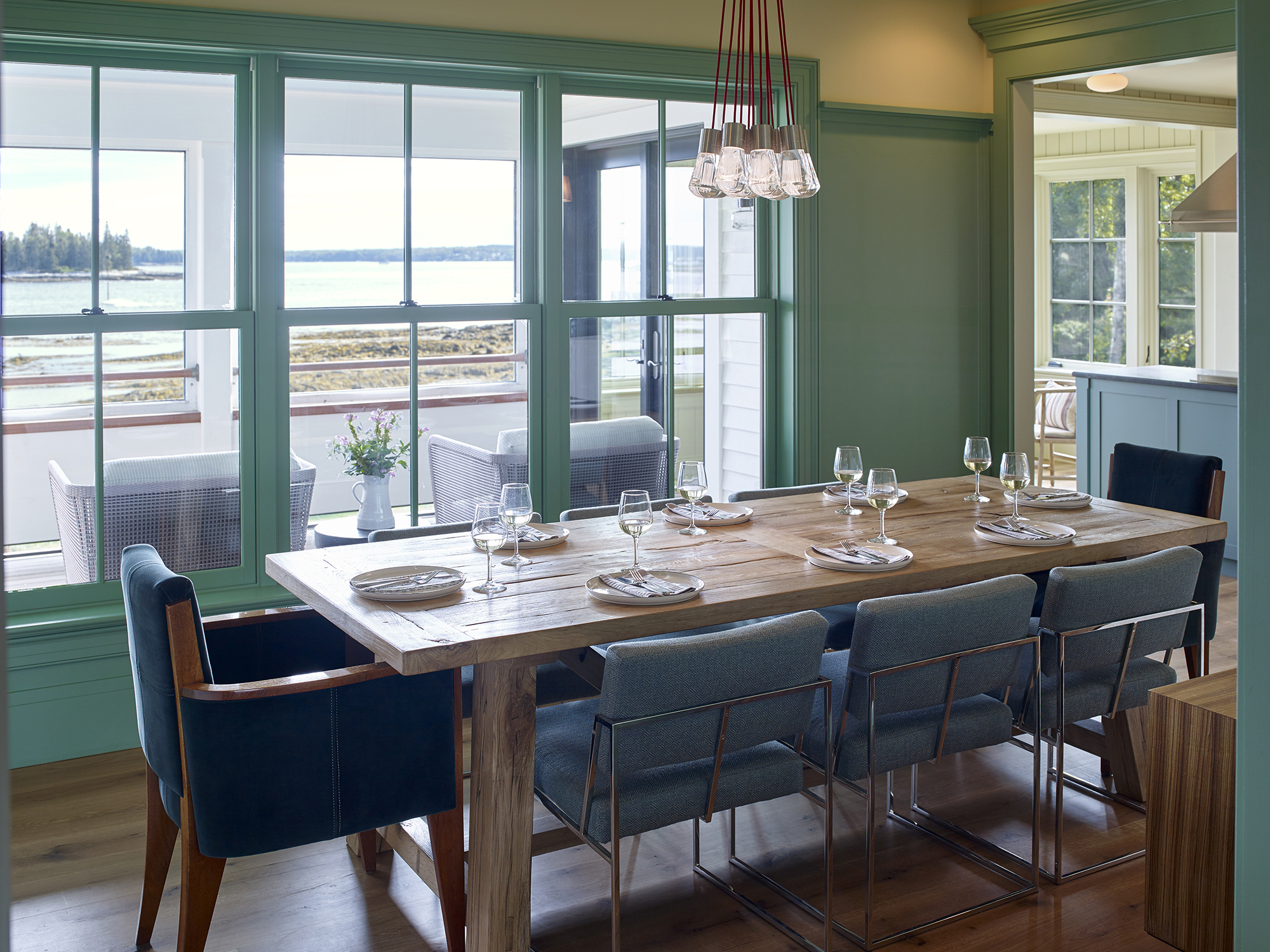 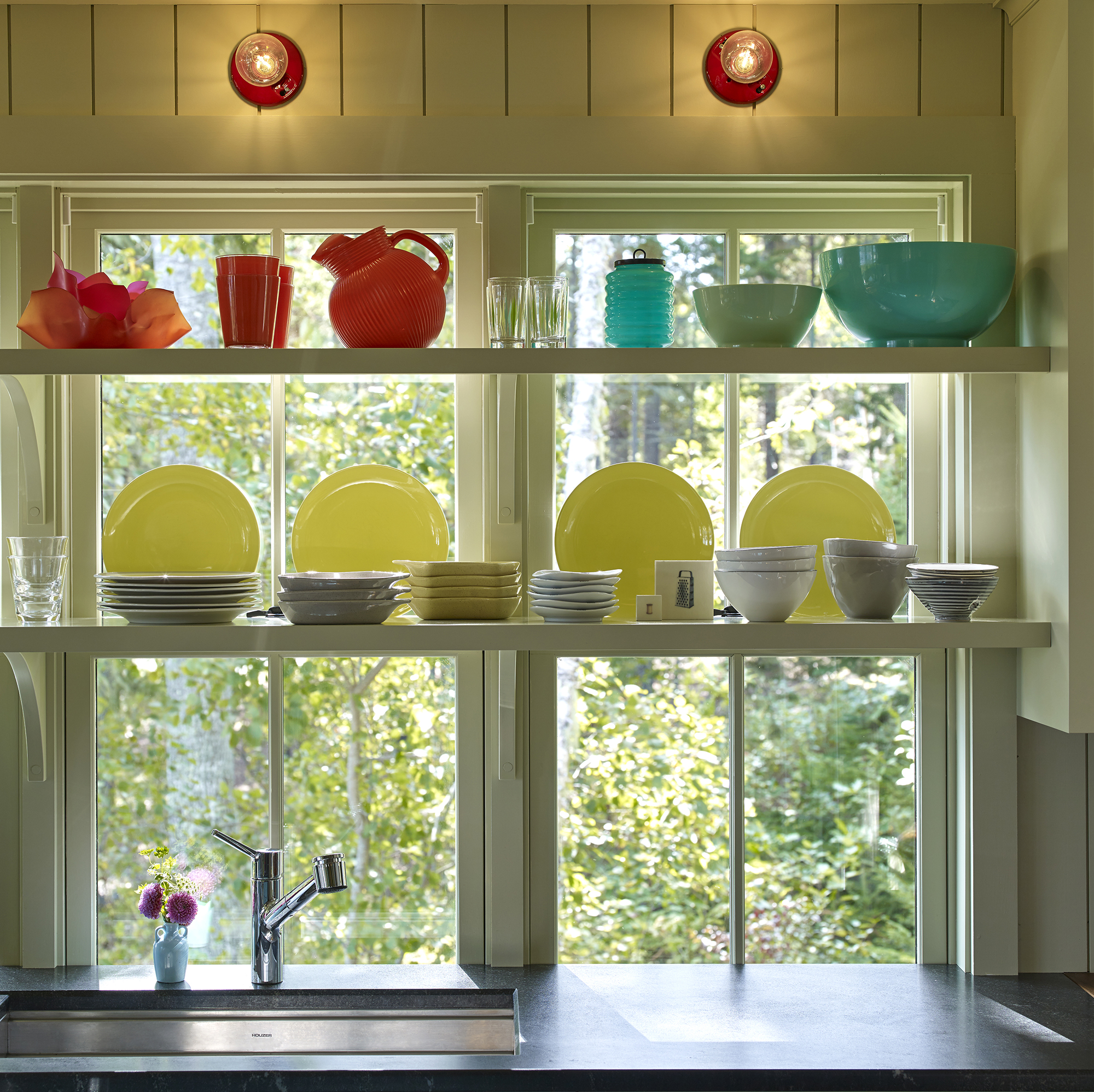 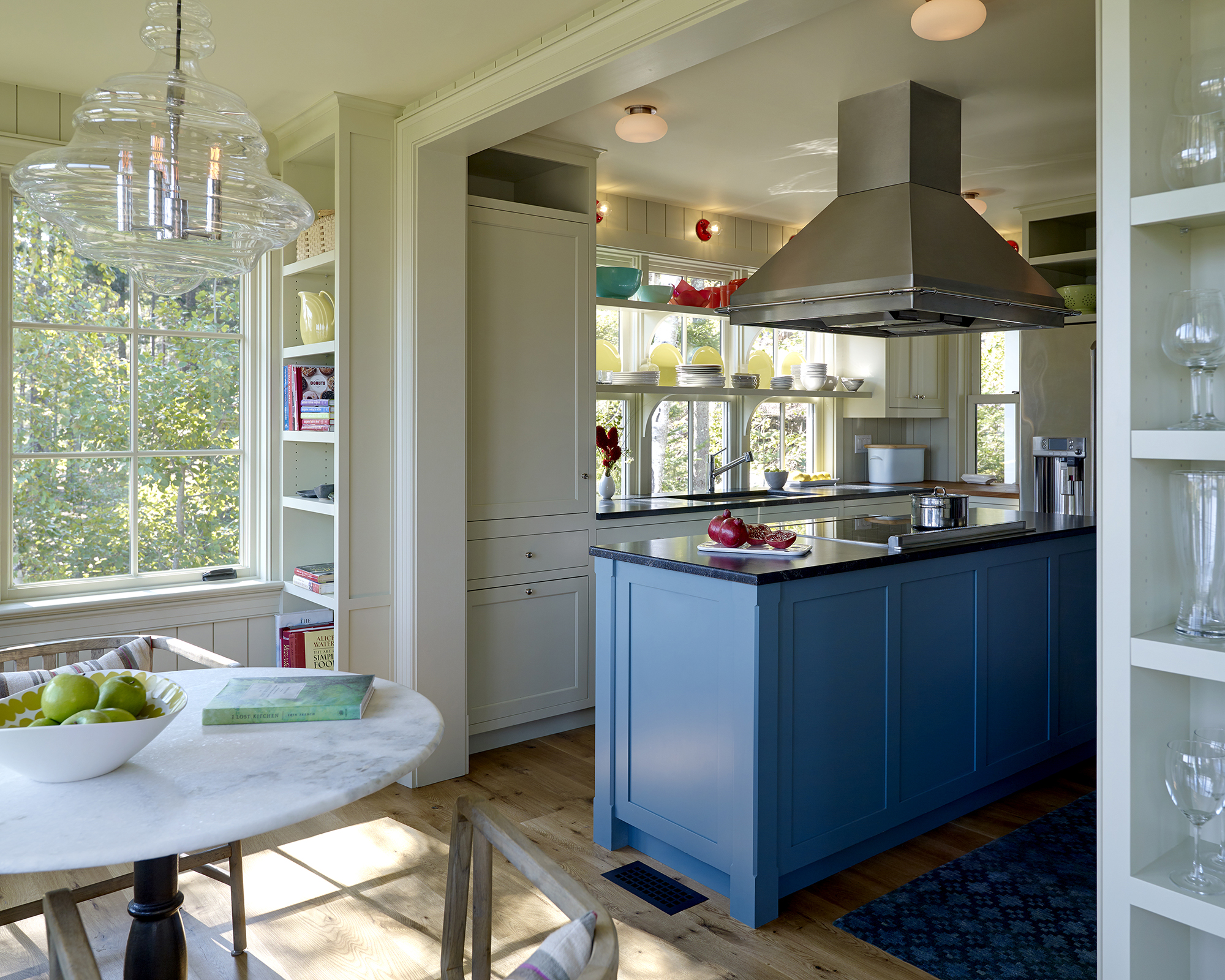 The sweeping design of the mahogany banister accents the stairwell, beautifully illuminated in the play of light and shadow. 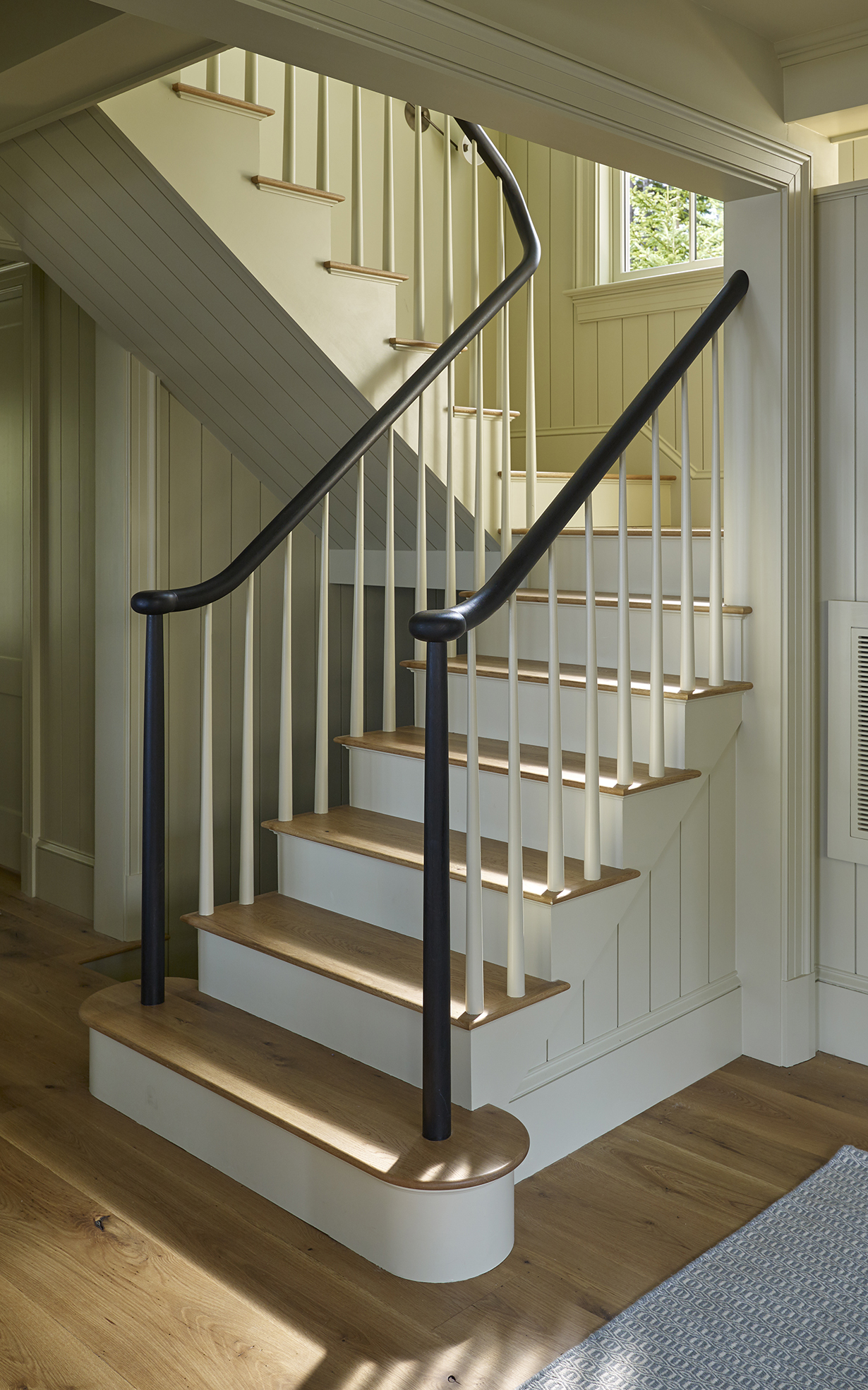 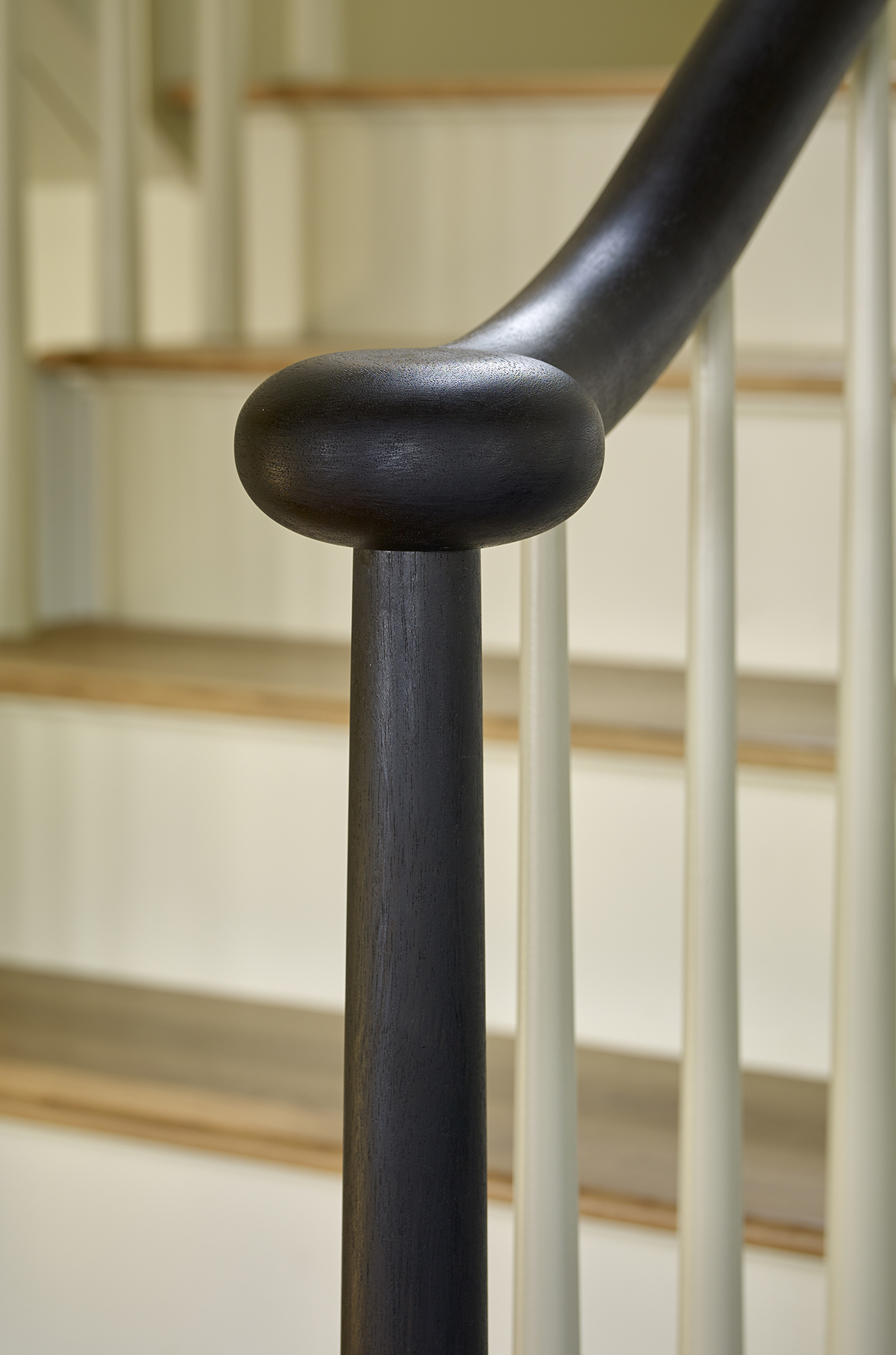 The homeowner notes, “The lighting fixtures are the jewelry of the home!” A 1920’s French fixture graces the entryway accompanying striking fixtures that adorn the remaining spaces. All were carefully selected by the homeowner and interior designer. 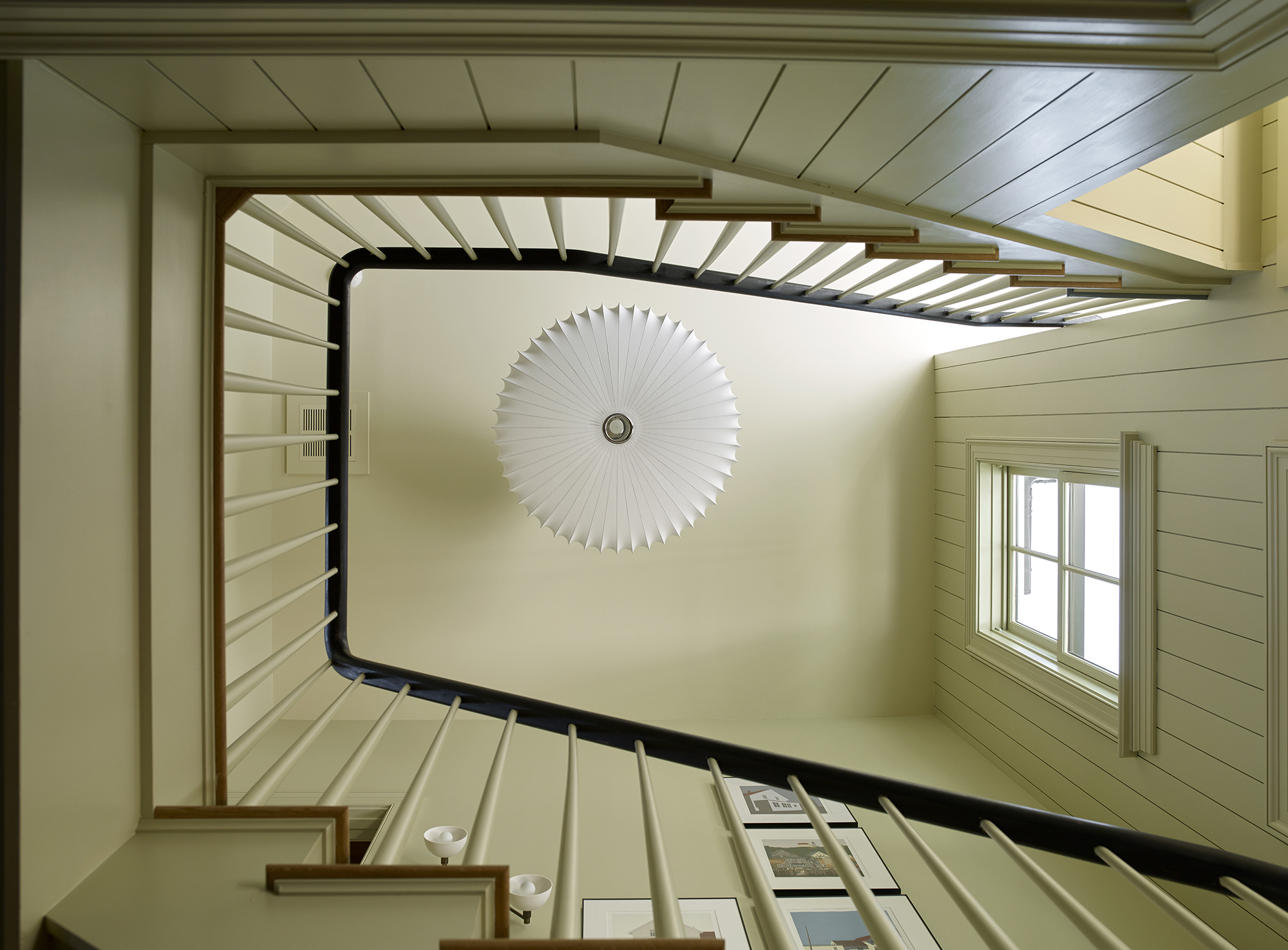 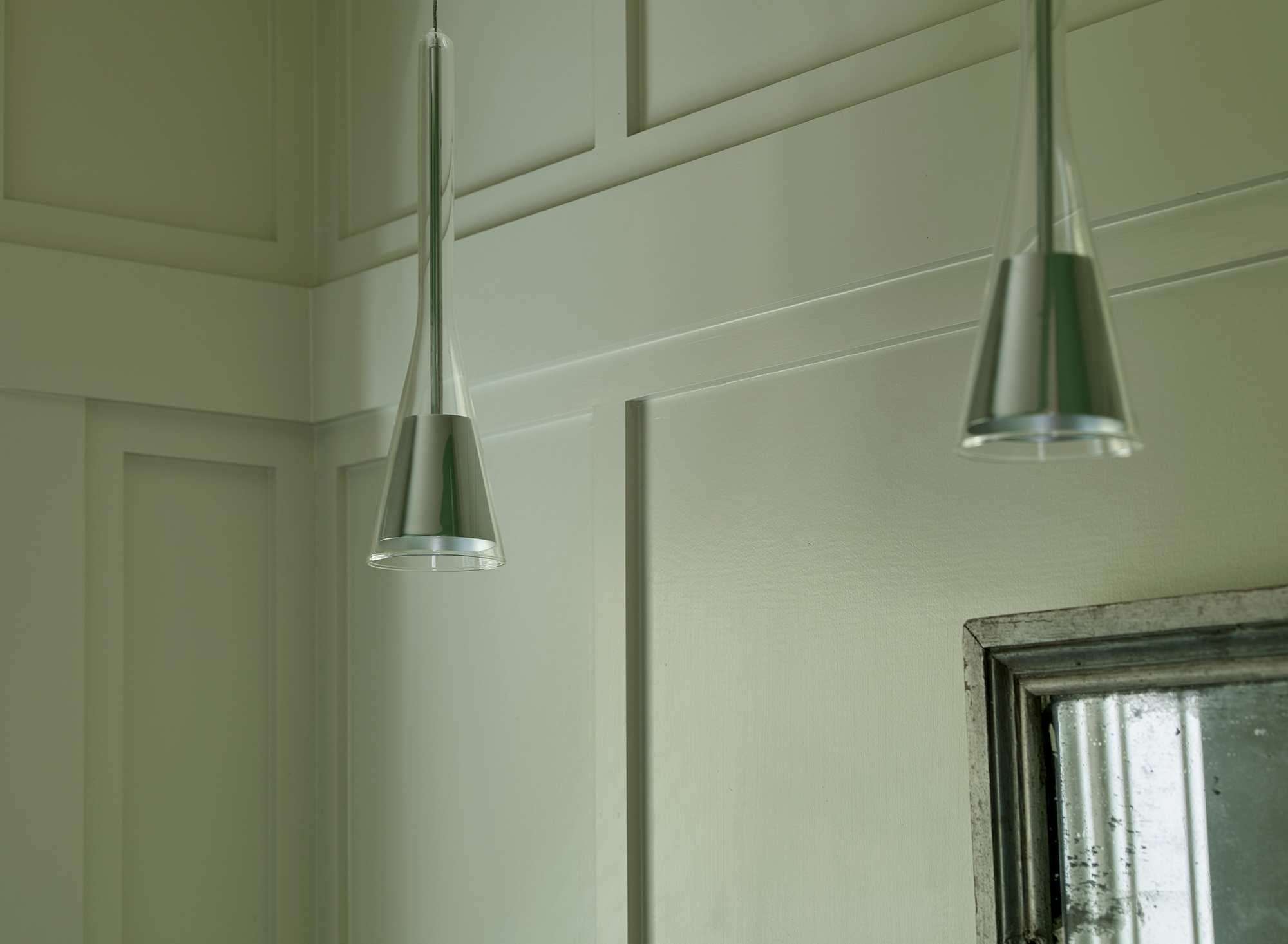 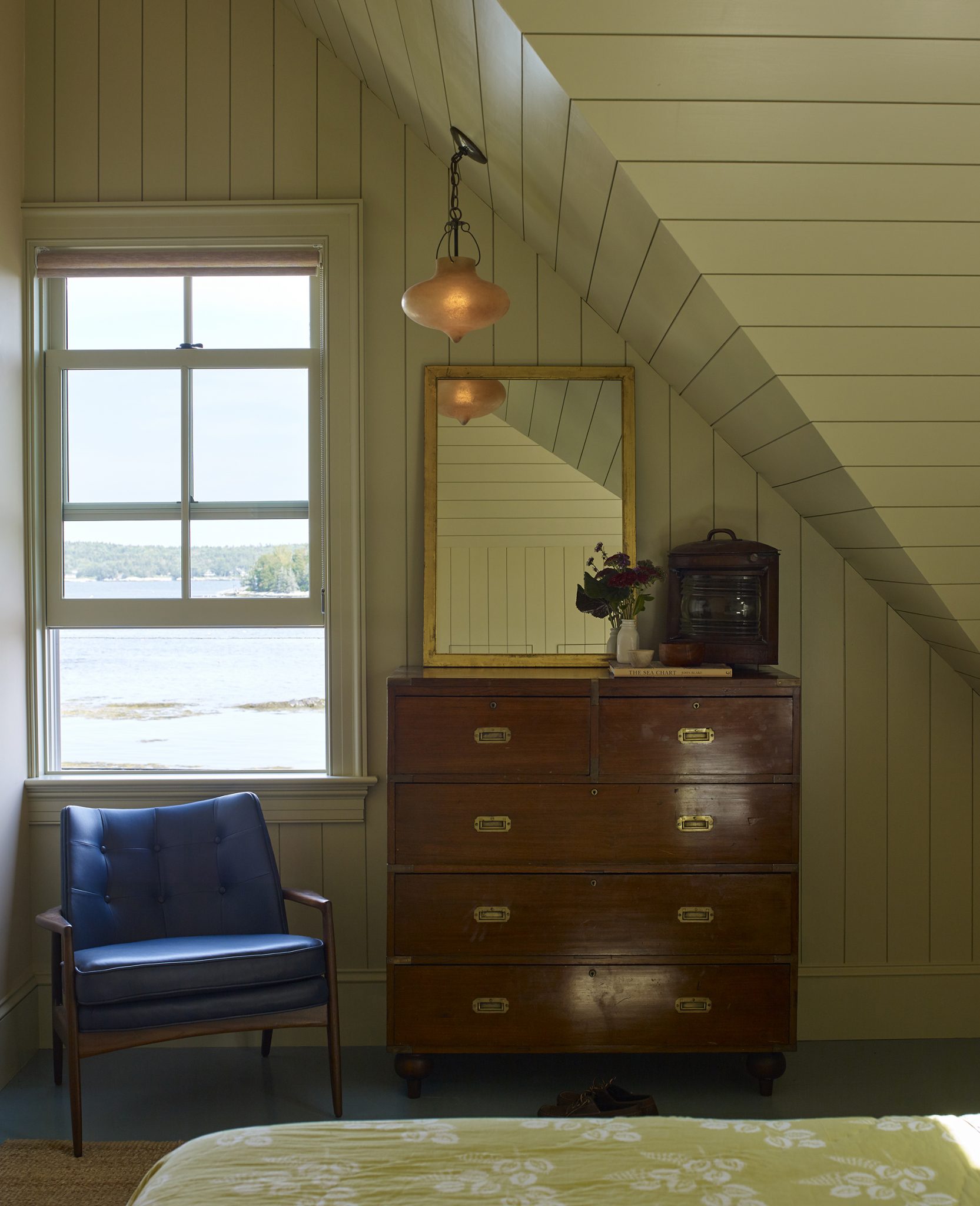 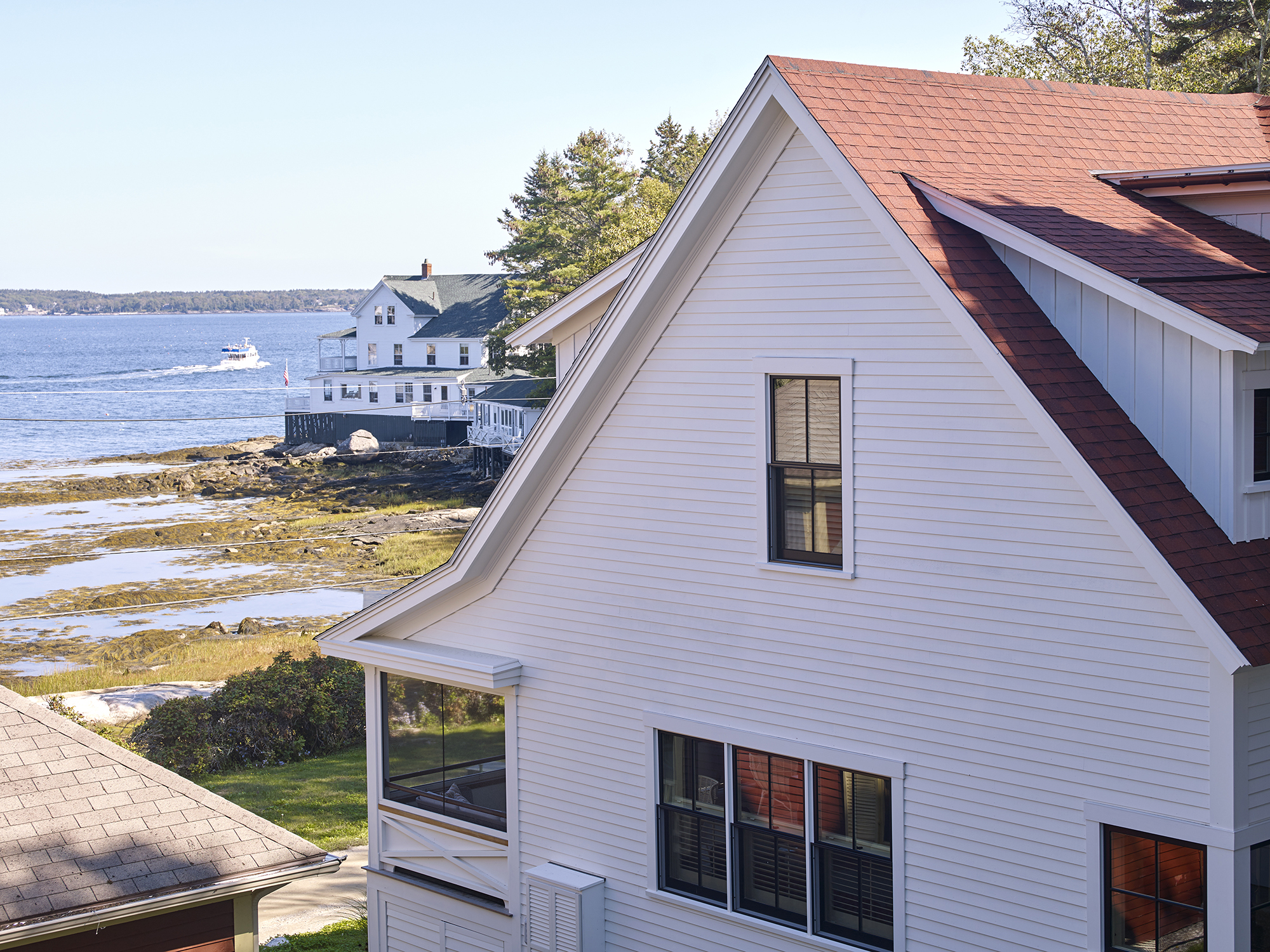 “My most memorable moment was when I walked around the point to the Albonegan Inn, the siding and clapboards were just going up. Standing out there and taking a pause, I turned around and could see the island cottages in a row alongside our new cottage. The scale, the feel, and the look sunk in… that was a really good moment. It was the moment I realized, ‘We had gotten it right’.” —Homeowner, 4th generation summer resident of Capitol Island