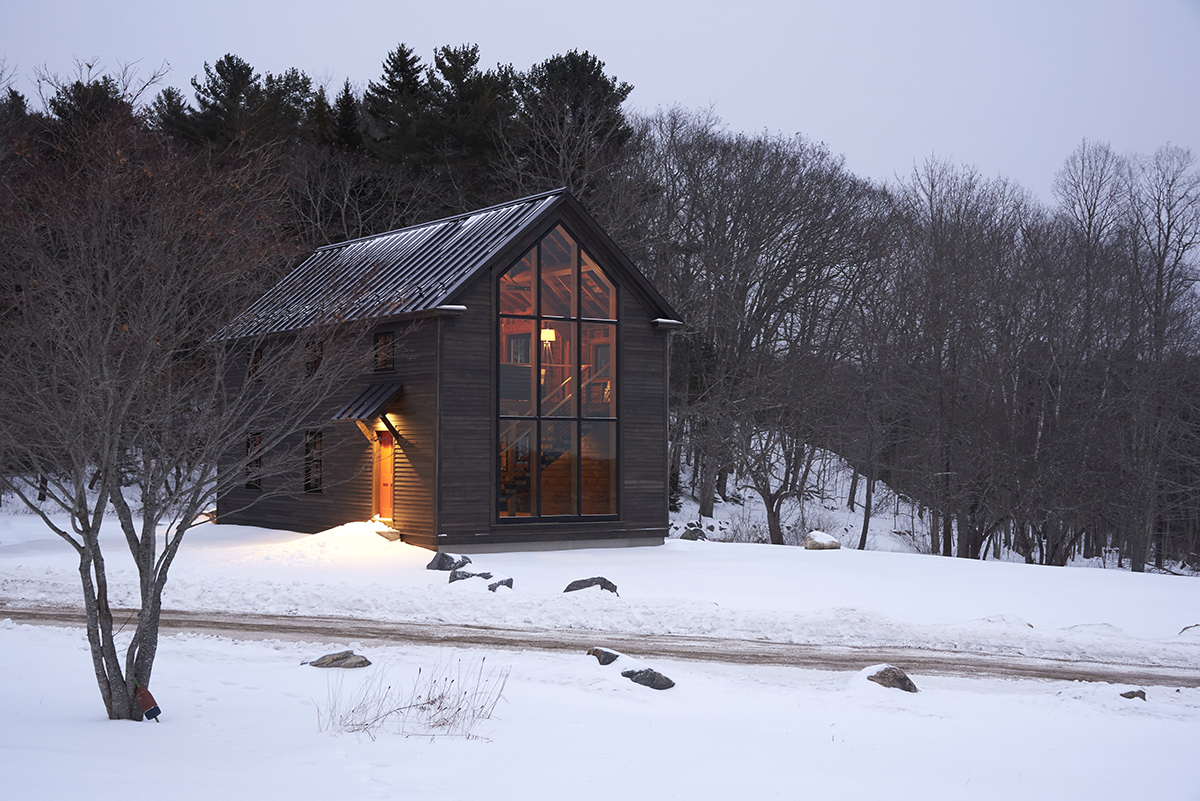 Over the past century, the Stoneview Barn has seen many different owners, functions, and locations. Originally built as an outbuilding to a recently demolished picturesque white farmhouse, this barn was previously used as a workshop, storage area for equipment and building materials, and near the turn of the 20th century, a place to hold local town dances. 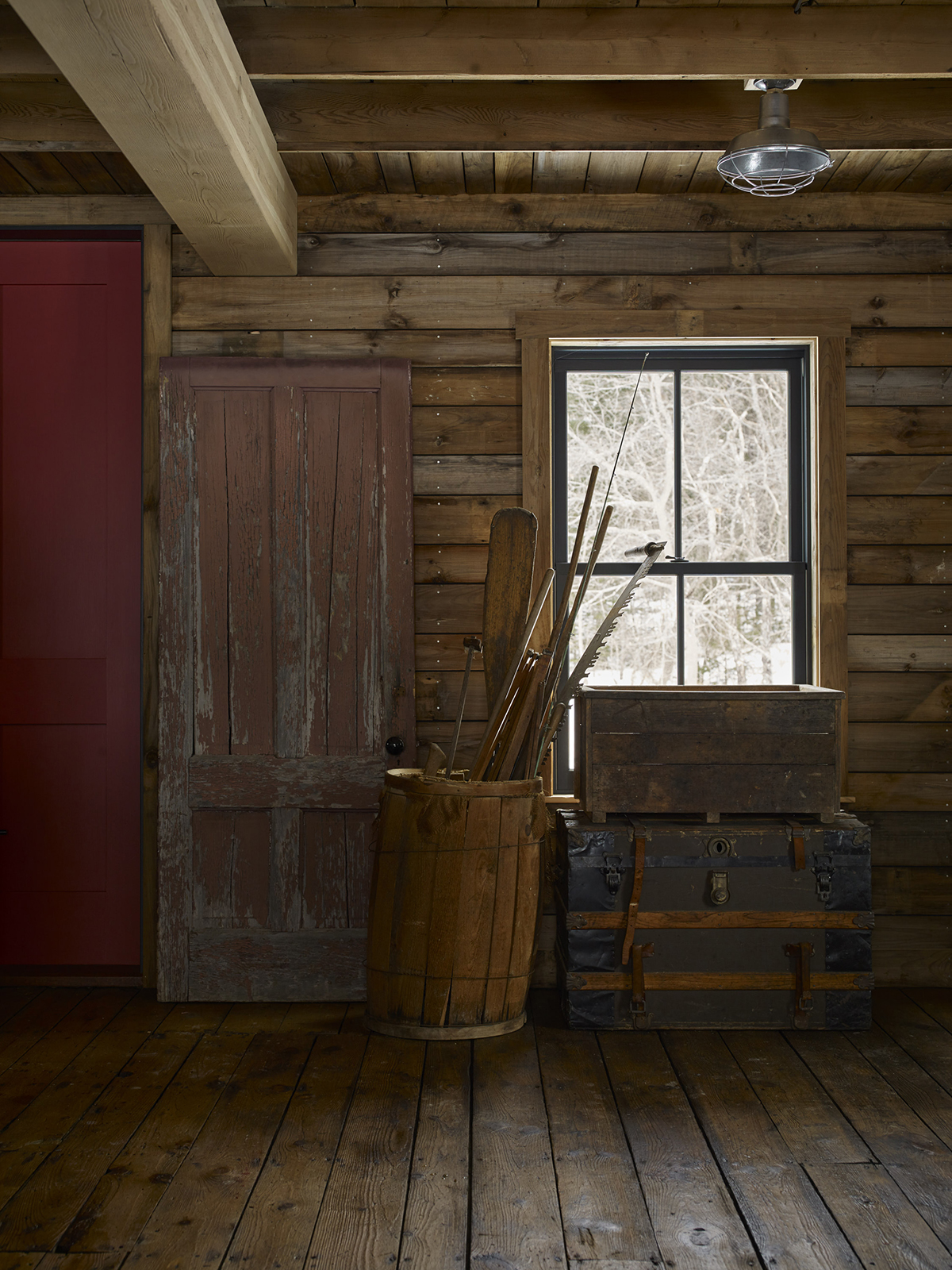 It was the barn’s rich historical background that convinced the client early on to save the old building. A structural analysis yielded a different recommendation from the architecture and construction team: renovation would be cost prohibitive due to the very poor structural integrity of the balloon framed structure.  The floor joists and roof framing were significantly undersized (the second floor bounced like a trampoline) and the barn lacked a permanent foundation (though it had somehow survived many decades on cinder blocks and lumber set directly on the ground). Our recommendation was further guided by the ultimate vision for the barn— one end wall, from floor to gable, would be removed and replaced with a glass curtain wall. 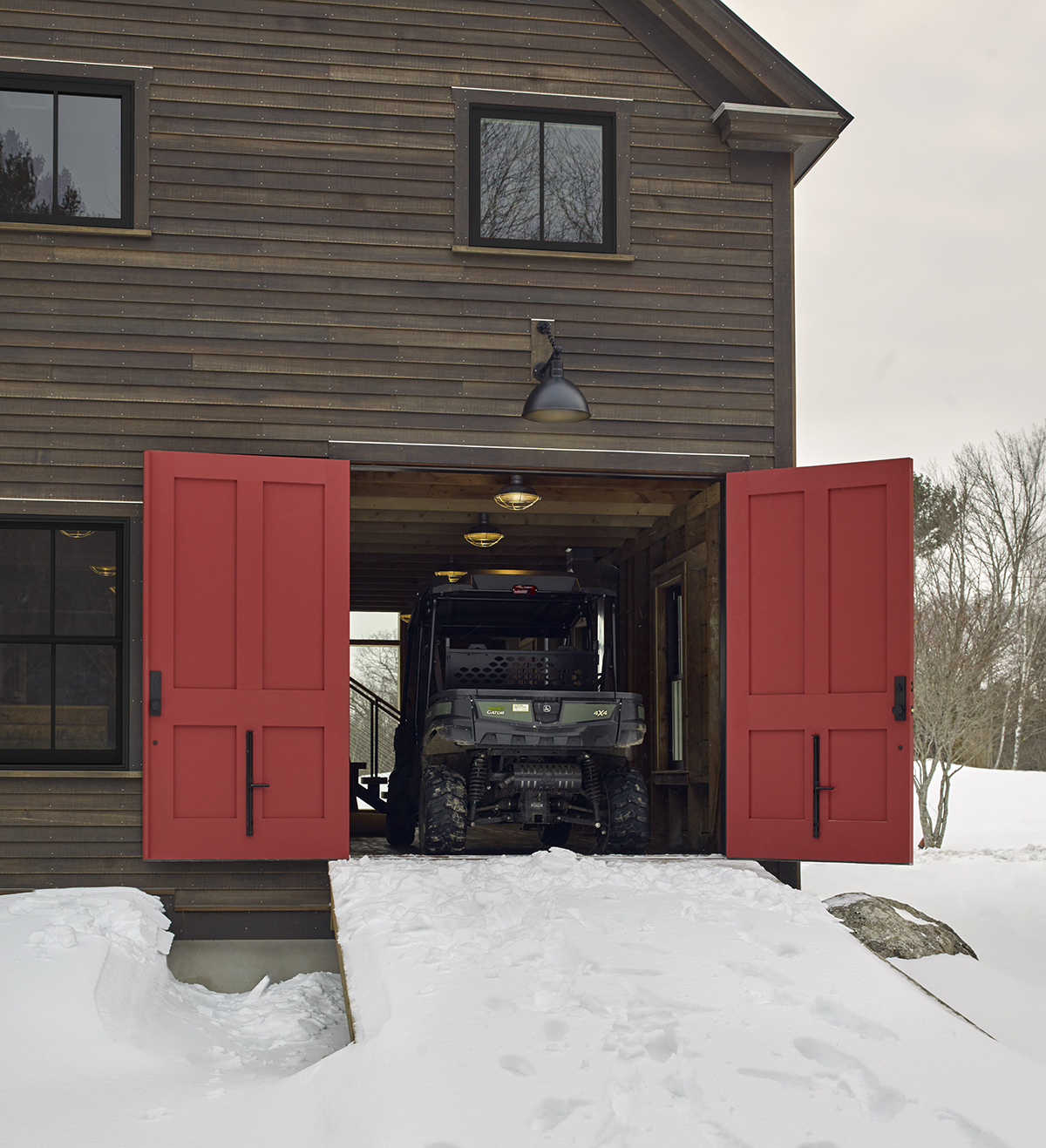 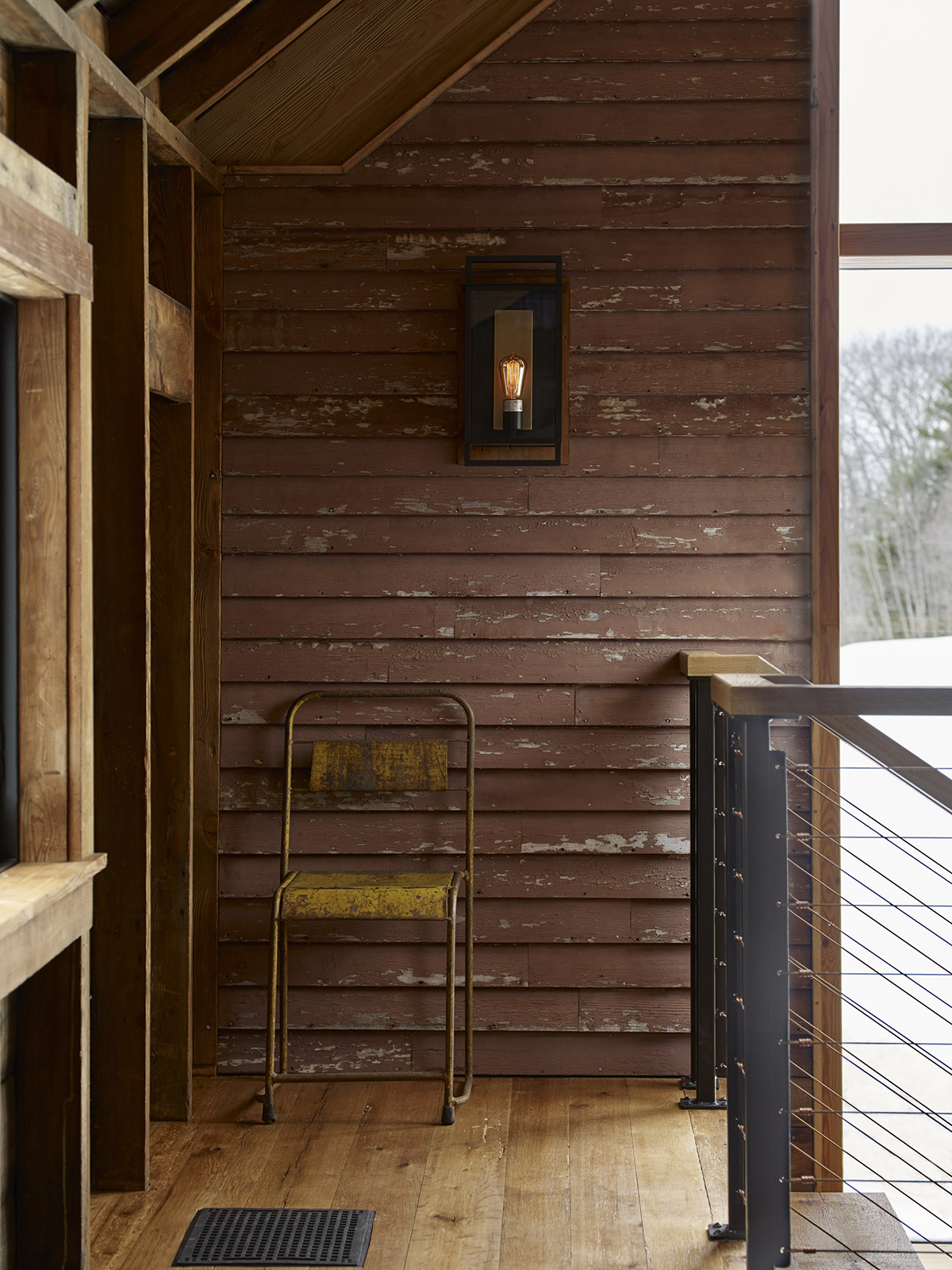 After weighing the options, the new owners of this 58-acre saltwater farm decided to continue forward with salvaging the last remaining structure on the property.  The design team engineered a new skeletal support system with custom Douglas fir glulam beams and roof trusses delicately installed through the existing framing to bolster up the spindly floor and roof members. The same glulam beams were cantilevered through the existing façade to create a modern deck that hangs in space, with no visual support posts or brackets.

This deck, along with the introduction of the massive glulam curtain wall system installed at one of the reconstructed gable ends, allows for spectacular views while ascending the steel and reclaimed white oak barn beam tread stair. Other features were added throughout the antique barn to create a juxtaposition of old and new. The original exterior red barn lap siding was salvaged and re-used on the interior walls flanking the curtain wall. Preserving the character and feel of the existing exposed stud framing was very important to the client, considering the feeling of antiquity it added to the project. With this in mind, the remaining walls– with exposed studs of at least three different primary paint colors that broke the barn into thirds by color– were vapor blasted with recycled glass and walnut shells to remove the many layers of paint and bring out the natural character of the wood. 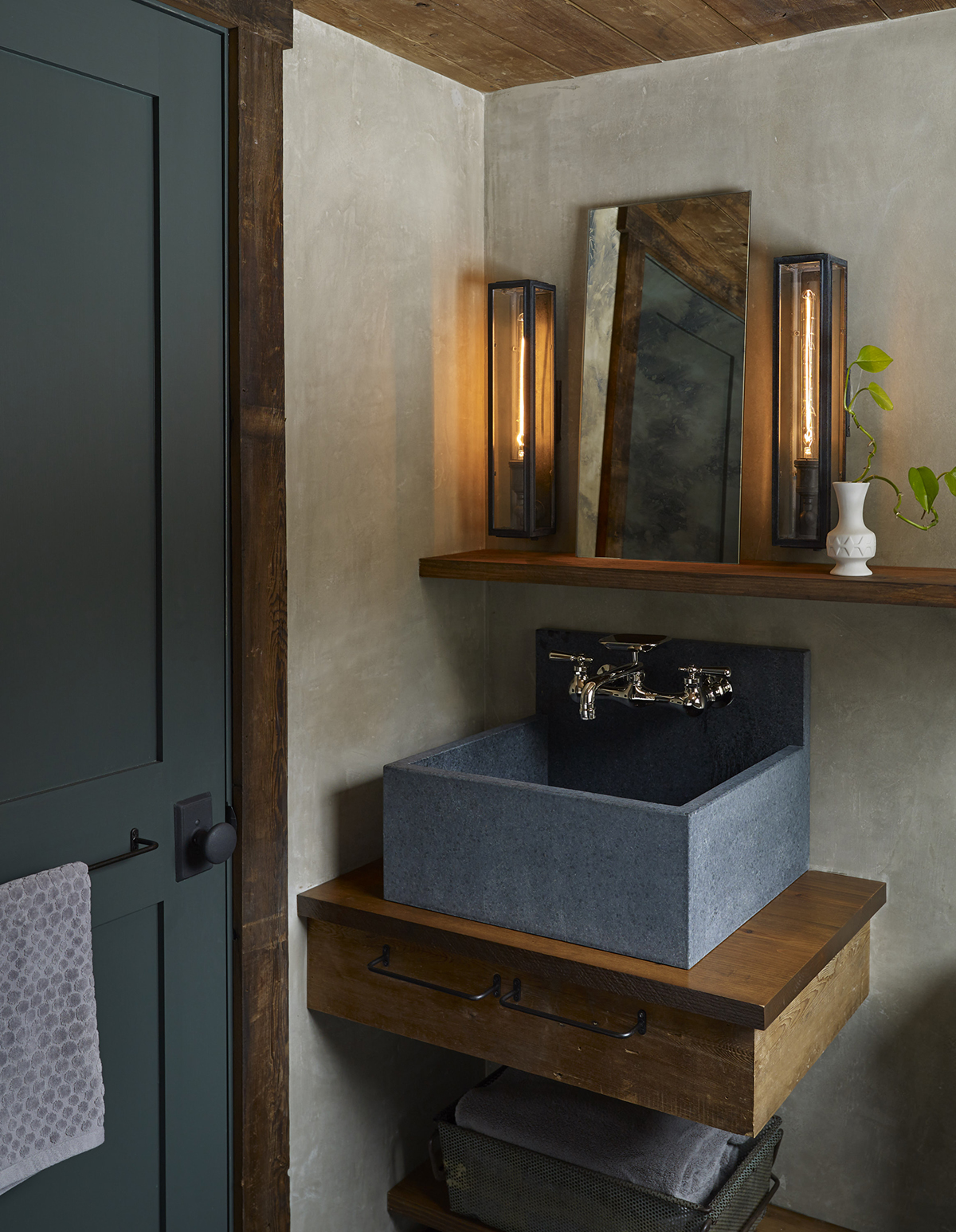 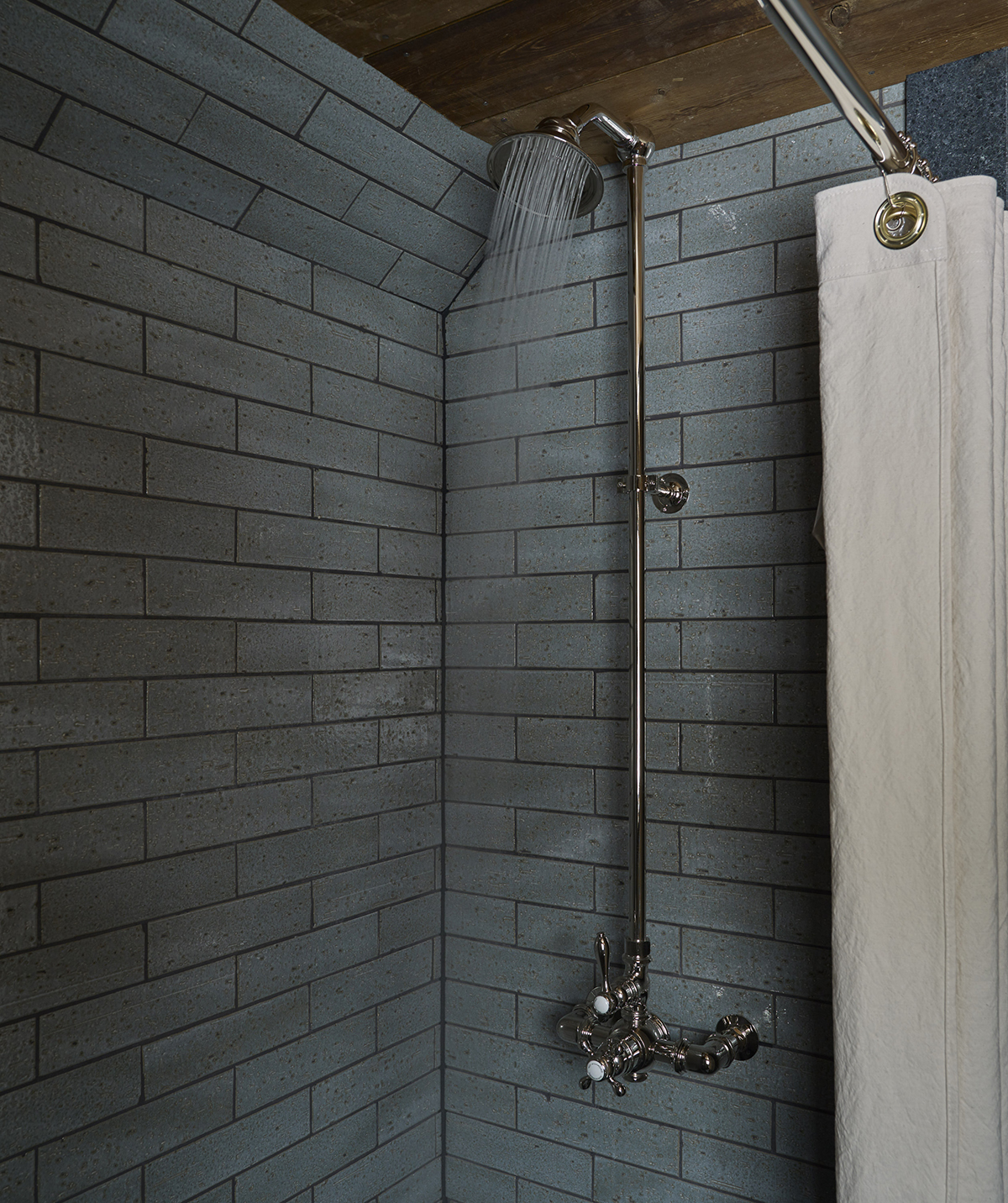 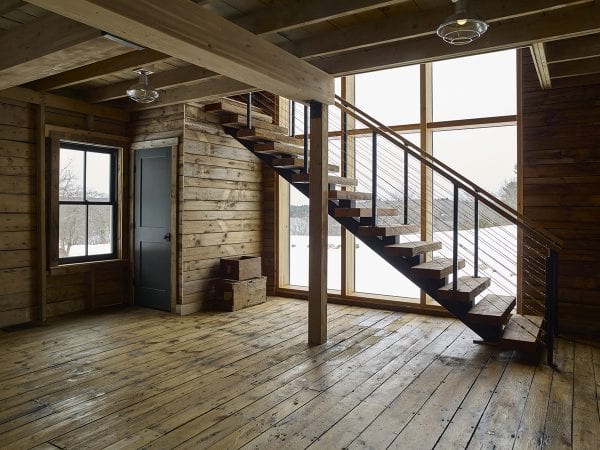 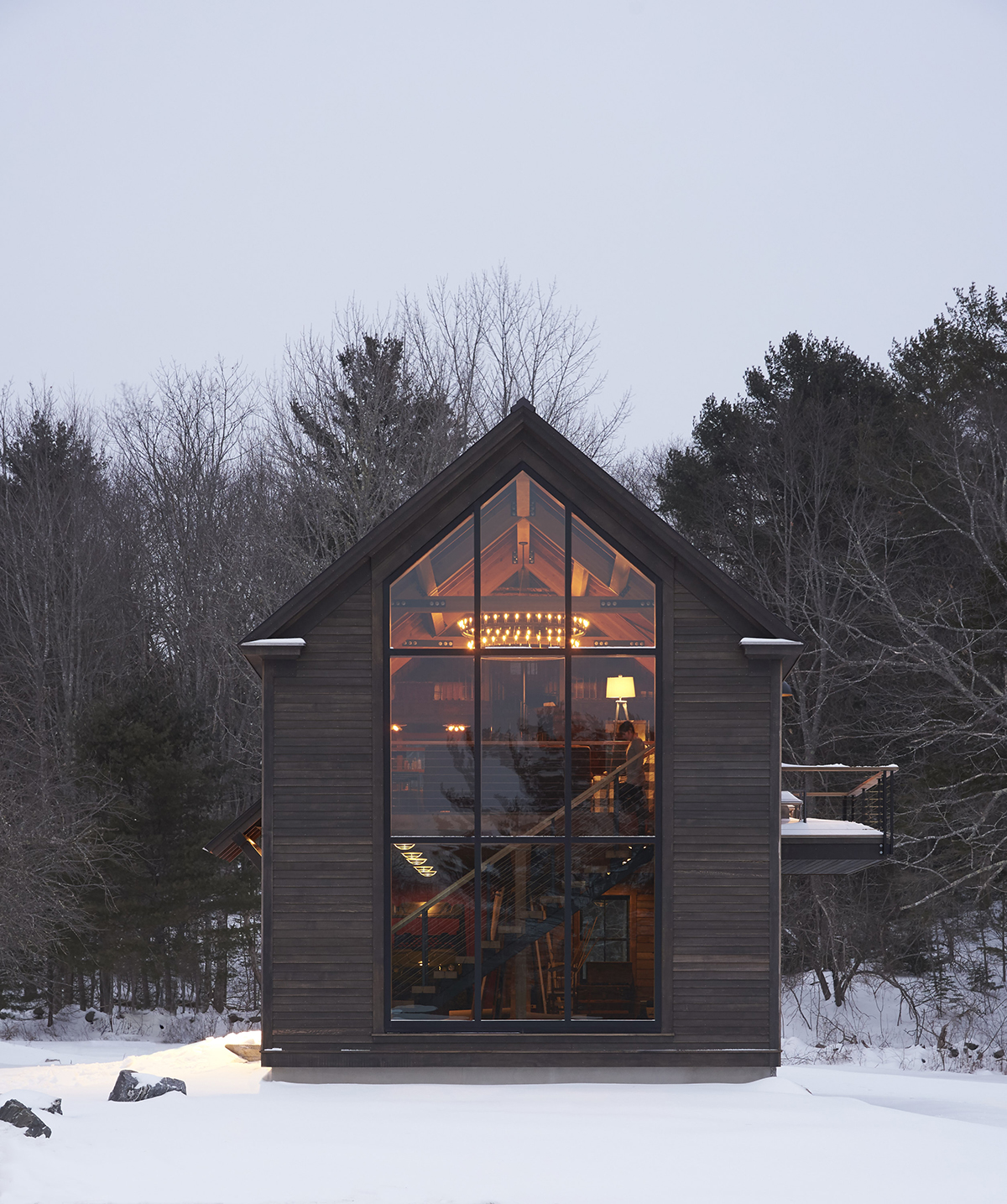 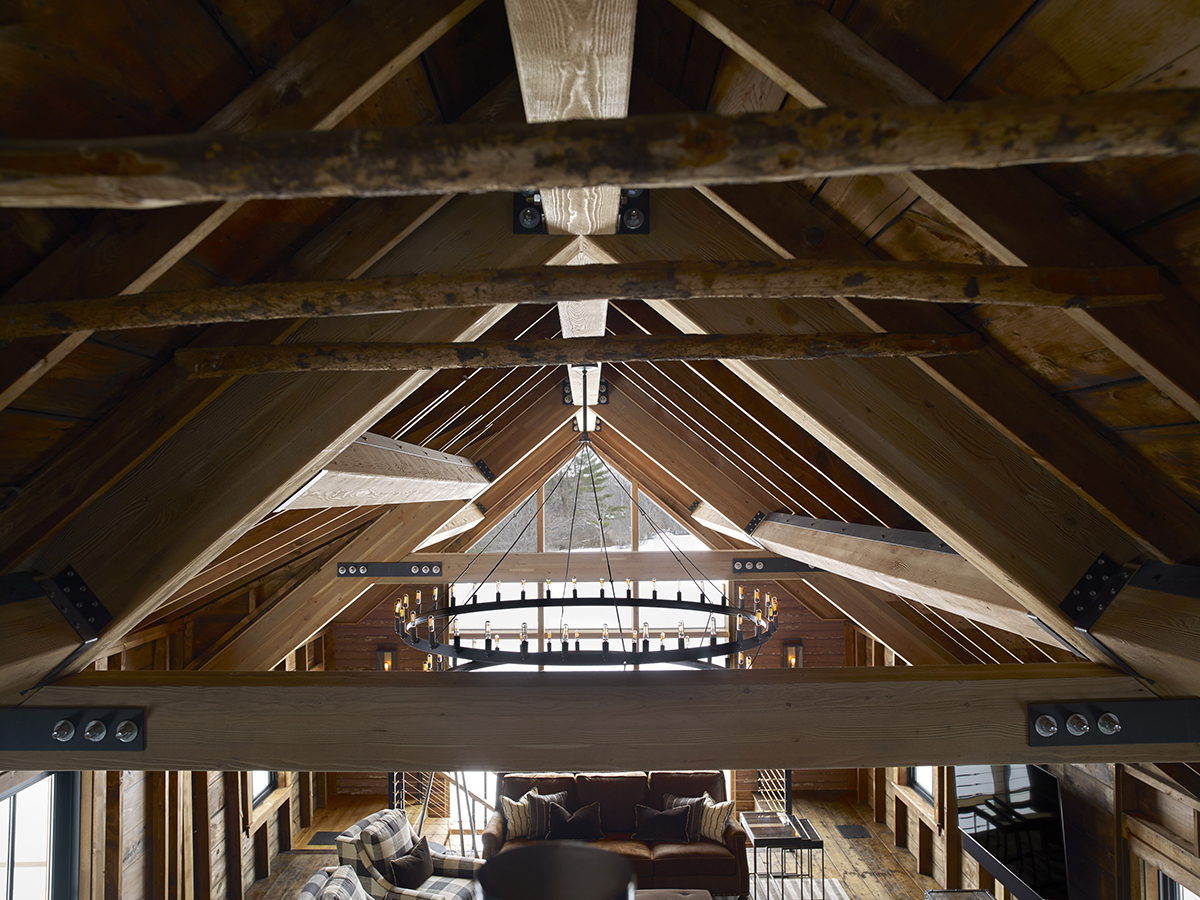 Wherever possible, the team found ways to salvage and reuse existing lumber and materials from the original barn. The powder room vanity and kitchenette cabinets are built from reclaimed work bench planks originally located on the first floor. Three round debarked pine collar ties, most likely used for hanging a hunter’s ‘catch of the day’ in times of old, were stored and reinstalled in place as the project neared completion.

Considering the client’s strong desire to maintain the exposed stud look on the interior, running electrical, plumbing, and HVAC systems became a challenge. Where often designers rely on wall cavities and chases to conceal these utilitarian necessities, the design team opted instead to embrace and celebrate the support systems of the building. Exposed galvanized ductwork for heating and cooling, electrical conduit and surface mounted switching and light fixtures, and old-world style plumbing fixtures– such as the surface mounted shower head and valves– were all judiciously selected to celebrate their inherent beauty. 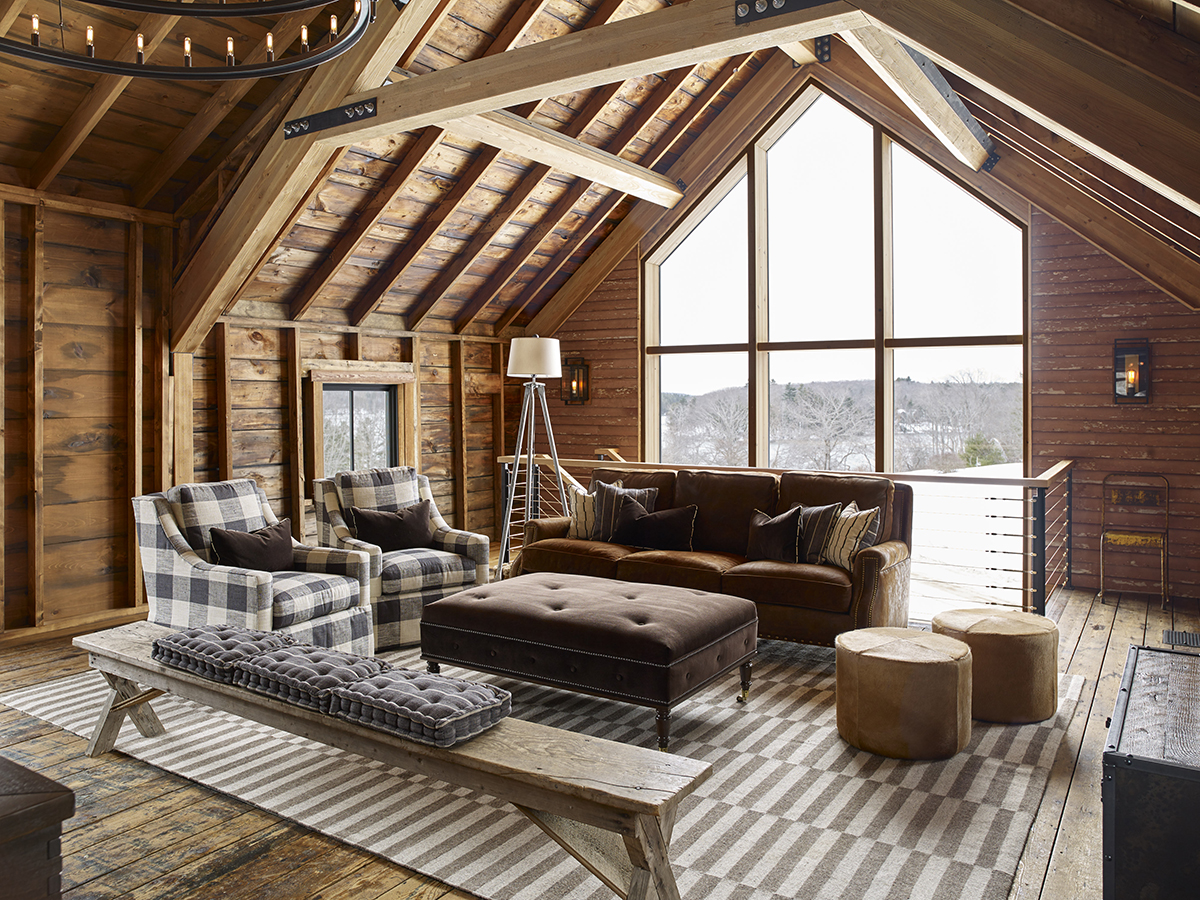 Not too distant from its workshop-storage-dance hall past, the renovated Stoneview Barn remains a workshop and storage area on the first floor, with an entertaining space above.  The second floor boasts a large lounge area with big screen TV, perfect for watching the football game with friends and family; a custom pool table that can convert into a ping pong table, which has already seen its share of tournament games; a new full bathroom and kitchenette; and a small resting loft atop a custom steel spiral stair, a perfect spot for reading or napping on a rainy summer day. This barn has a rich heritage of past uses, and its new owners plan to continue to add to its vibrant history with friends and family for years to come. 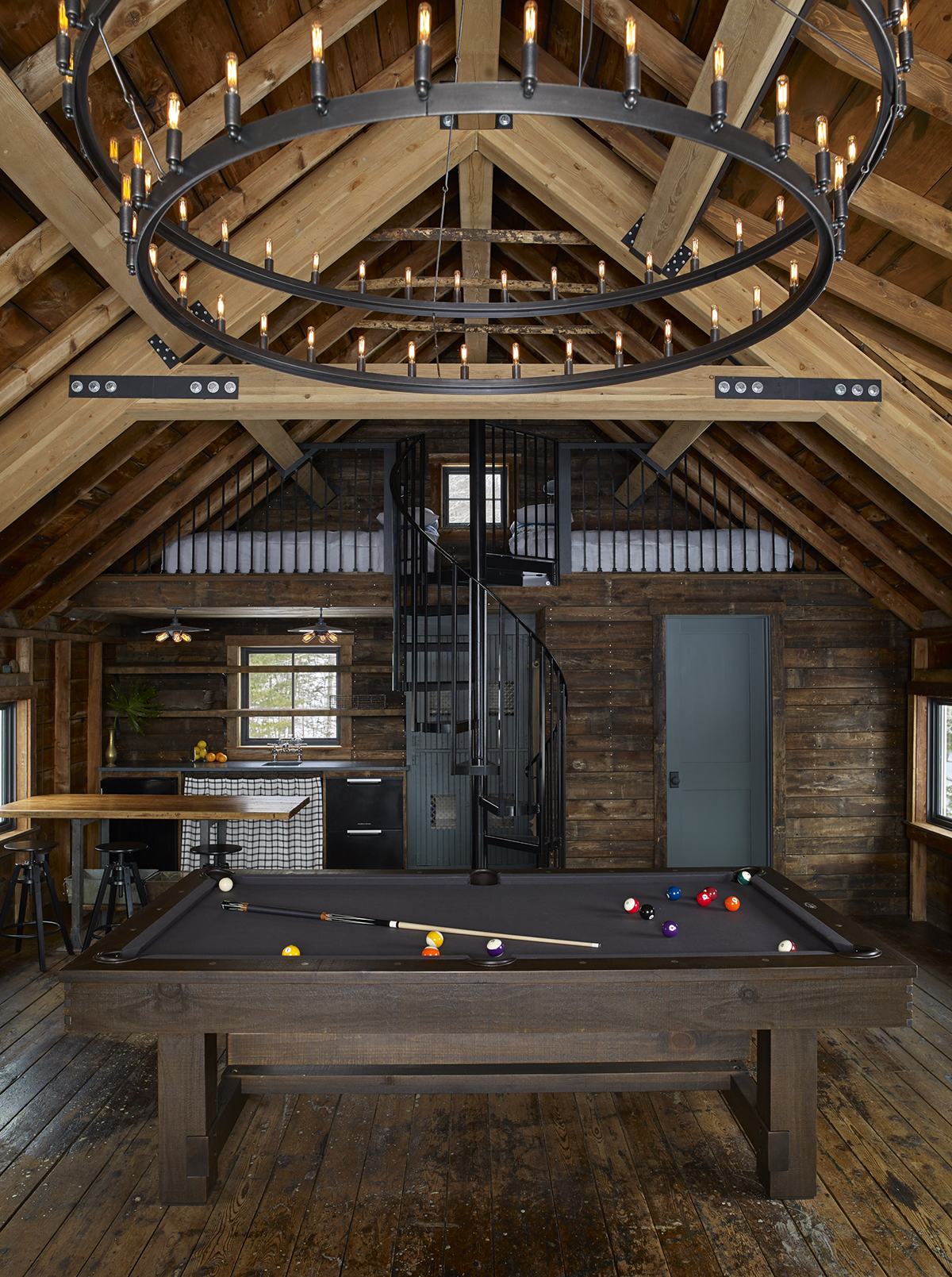 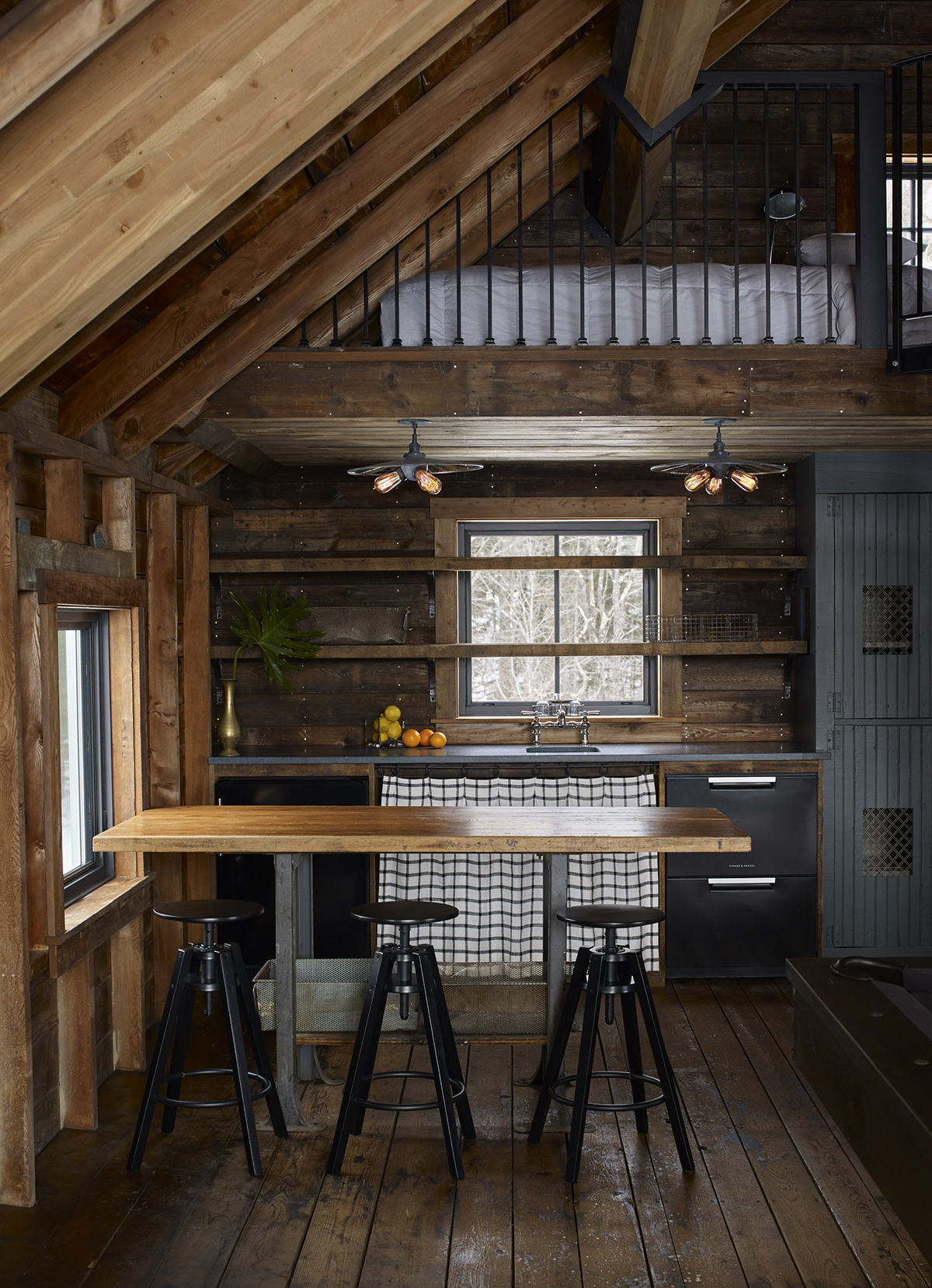 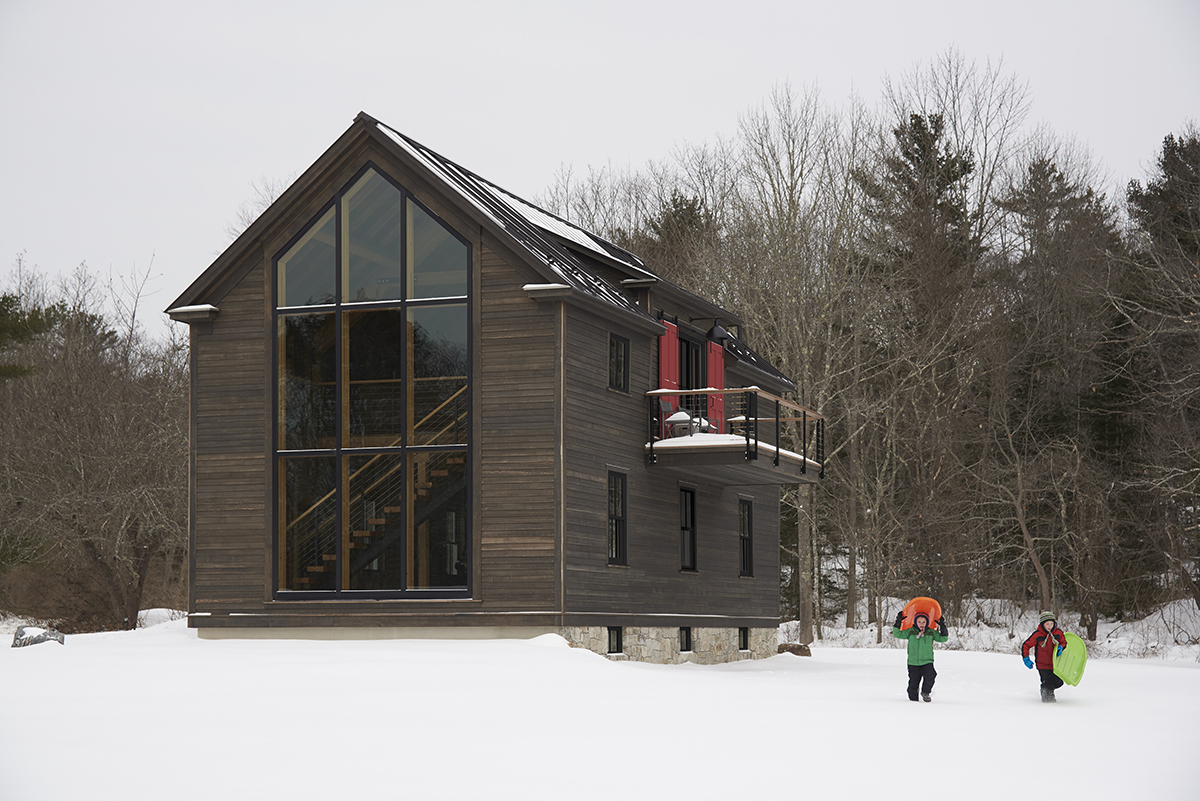 The exterior of the barn was completely redone, with all new stained red cedar lap siding and trim over the continuous insulation layer, standing seam bronze metal roof, and new doors and windows to match the style of the original structure. The subdued tones selected for the exterior finish palette were chosen as a nod to the long history of the structure, wanting the barn to blend in with the local vernacular and feel at first glance as though it had been there for a long time, despite its new location. Originally, the barn was located mere feet from the main road, which was acceptable when originally built, but in modern times felt out of place and over-exposed to passersby.  One of the first decisions from the design team was to relocate the barn to better capture the views of grassy fields and a distant river that glistens in the sun. A new foundation was poured approximately 100 feet away, and a local professional barn moving company was hired to set the barn in its new resting place.

The original Stoneview Barn, prior to renovation: 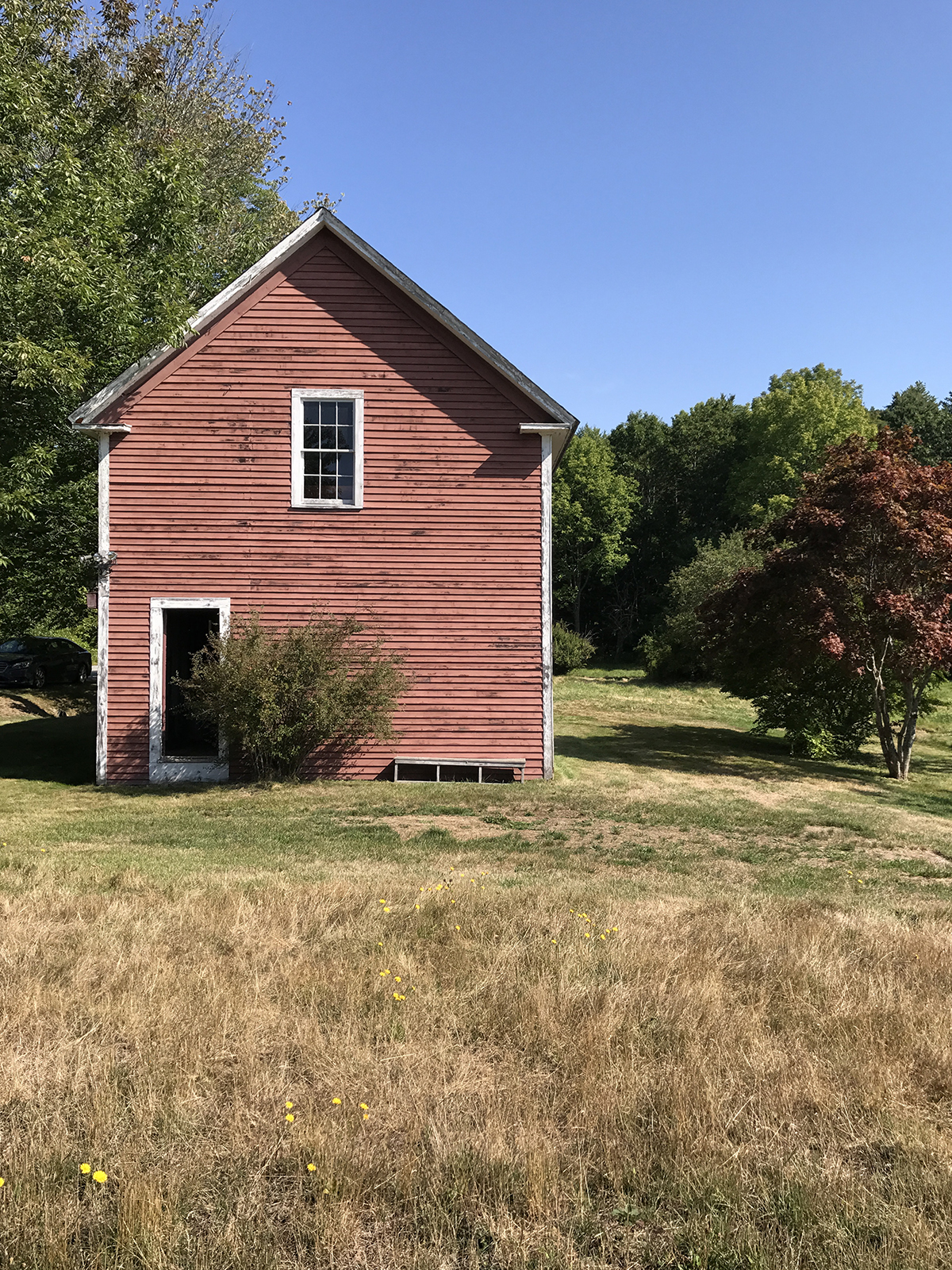 Join us on Instagram and follow the evolution of this waterfront field transform into a sanctuary— @stoneview.spa.